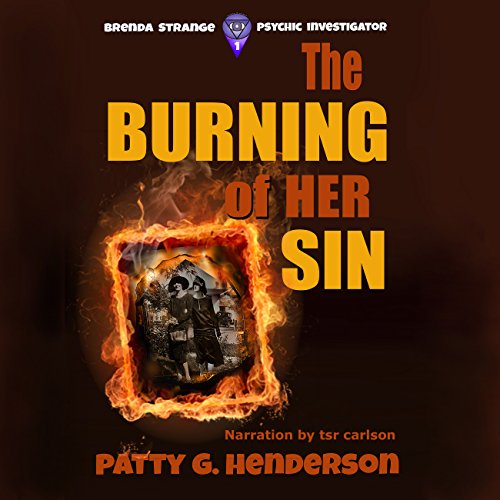 Meet Brenda Strange. Wealthy. Dead Ringer for Princess Diana. Once a junior partner in a thriving, prestigious New Jersey law firm, she had everything going for her. But something went wrong. When a disgruntled client goes on a killing spree in the office, Brenda is counted among the dead. Except she came back. This is the first book in the Brenda Strange series.

After learning to cope with her near-death experience and newfound psychic abilities, Brenda and her lover decide to move to Tampa, Florida and the house of their dreams. Malfour House is an old Victorian located in The Tides of Palmetto, an exclusive community for the rich. But after she and Tina move in, Brenda finds the dingy walls and empty rooms screaming their secrets in her mind. Brenda begins tracing a path filled with unsolved murder, betrayal, ghosts, and the deadly curses of Santeria, a darkly exotic religion.

Realizing that Malfour House will not let her leave until she unravels the clues to the horrifying murders long buried in its past, Brenda renews her career as a private investigator. And if that wasn't enough of a puzzle to solve, there is a mysterious intruder trying to chase her and Tina out of Malfour House.

What listeners say about The Burning of Her Sin

This story keeps you on the edge of your seat.

I really enjoyed this paranormal crime story. The narrator's voice suited the characters of the book. The paranormal aspect really enhanced the crime story and the two 'now and then' stories I found fascinating, sometimes forgetting which era I was in. Ms Henderson certainly writes a good crime story with plenty of red herrings to keep the reader/listener guessing.

If you are hearing impaired...

The storyline to this book is not a bad book but it is very difficult to maintain one's interest if the narration is unworthy. The narration was so breathy and quiet at times that I did not understand nor hear all that was being said. Also, the narration lacked a quality that made me feel anything other than someone was reading the newspaper to me.

Starting out, I was intrigued. The returning from the dead and finding new purpose was right up my alley. Spoilers ahead. it took a turn when I realised two things. Brenda was written to be one of the worst deductive reasoners ever. and two she treated Tina like crap. the former just frustrated me and made me face palm a few times. but the later made me just so angry. it was so consistent and blatant and just so deliberate that every other moment of intense emotion was overshadowed by just how angry I was. If you purposely leave someone out of something and lie to them you cannot be upset that they don't understand what you're going through, how can they? Tina kept trying to understand what was going on but Brenda just blocked her and lied to her and made it seem like it was Tina that was to blame. Everything was someone elses fault. I seriously wanted to turn it off. Every argument they had I was 100% on Tina's side and yet I knew they it was going to be twisted to where Tina had to be the understanding one, even when Brenda chose the house over her, without ever once trying to explain why it was so important to her. the Only reason I listened to the end was because I thought, there has to be a moment of redemption. there has to be a point where Brenda realizes that her love for Tina is more important than anything else. but that never happens. she's just there comforted by the ghosts who are happy to keep her there all to their selves, instead of trying to get her to embrace the life of love that had been denied them...... just so much grrrrr. Everytime Brenda bemoaned that Tina was gone I just felt my whole body tense in anger, she's gone because you drove her away and locked her out, and yet you are going to twist it around so that it's her fault..... okay I'm done. not going to continue the series, I'm afraid it'll give me a stroke.

Would you listen to The Burning of Her Sin again? Why?

What does T.S.R. Carlson bring to the story that you wouldn’t experience if you just read the book?

Her performance added to the spookiness.

I found Patty's first Brenda Strange story very intriguing, and even sympathized with the ghosts. The story is very creepy at times--the house alone reminded me of something on the order of Anne Rice's The Witching Hour. And I think fans of supernatural mysteries will enjoy it. Do check her delightfully creepy book out!

I read this book several years ago and listening to it reminded me of just how much I enjoyed it. The mystery is good and the characters engaging - particularly the lead, Brenda Strange.

The narrator did a good job with most of the characters, I thought, but the constantly calm and quiet reading of Brenda's part made it very difficult for me to get into the story as much as I remembered being. Everyone else had changes in inflection but Brenda's voice was very slow and quiet - sometimes so quiet that I couldn't hear some of the words - and that didn't change even when she was agitated or angry.

I still recommend the book. The story is very good.

Loved the paranormal story/mystery line, kept me on my toes and did not want to stop listening unless I absolutely had to. Can't wait to listen to Book 2. Take a listen/read I don't think you will be sorry.