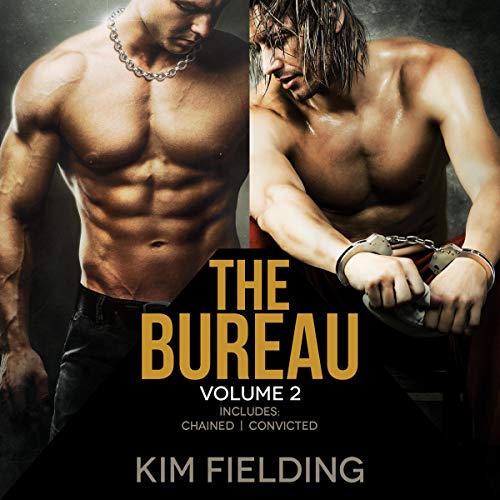 By: Kim Fielding
Narrated by: Joel Leslie
Try for £0.00

This collection contains the fourth and fifth Bureau novellas.

An agent for the Bureau of Trans-Species Affairs? That’s the best job in the world. And it’s enough for Terry Brandt, who doesn’t need personal relationships complicating his life. His newest assignment puts him undercover, investigating a Hollywood agent who may have some evil tricks up his sleeve.

Edge is not the man he appears to be. Although he’s a member of the Hollywood agent’s security staff, his true situation is darker and deeper than that. Ordered to seduce the new prospect, Edge finds himself caught in conflicting loyalties.

Vietnam veteran Kurt Powell’s addiction almost cost him everything, but a job as federal agent with the Bureau of Trans-Species Affairs helped him find sobriety and purpose. Now he tracks down dangerous paranormal creatures as well as humans who abuse their magical powers in illegal ways.

Sent from Belfast to the United States as a boy, Desmond Hughes later fell into a disastrous relationship that led to horrific murders. He’s spent 17 years in a bleak prison with few comforts and no hope of release.

A new mission throws Kurt and Des together in a desperate attempt to prevent disaster. Sometimes what’s long been lost can still be found, but the road to redemption is never easy - and a mutual attraction may not ease the way.

What listeners say about The Bureau: Volume 2

Much anticipated and didn't let me down

I have Volume 1 and was anticipating this keenly - the continuing story of the evolution of the Bureau of TranSpecies Affairs. It didn't disappoint.

Chained looks at how far some will go to achieve fame and fortune, and the dodgy setup of Mr Whittaker and his power grabbing Mr Fixer role in signing up and promoting new Hollywood talent, by whatever means,
Terry Brandt, a bureau agent is sent in undercover to try and expose his operation and meets Edge, who at first on the surface appears to be a security guard. It is revealed that Edge is a Dog shifter, bred and sold to be intensely loyal to his owner - Whittaker, along with his 2 brothers.
However, as Terry and Edge develop a connection, Edge is conflicted between his loyalty and then his attraction to Terry, who treats him with consideration and kindness. Their developing relationship is very poignant, with alot of sadness on both sides with past hurts. How they come to save the day is very satisfying and again looks at who is the monster - the animals or the humans. Loved it.

Convicted is a tale of redemption and understanding past acts and striving to be better.
Kurt Powell is a Bureau agent - directed to look into an old case and he needs the help of Desmond Hughes (Des). Des had left Ireland, ended up in USA and in a disastrous relationship with Larry, Larry and Des (who was Larry's sidekick and muscle) murdered people with the aid of magic boxes. They were caught 17 years ago, Larry shot dead, and Des has been in prison ever since.
Not all the boxes were found and one has recently been used for evil deeds, and others are looking for them.
Kurt and Des go on a road trip to try and find the remaining boxes and as per good road trip stories, it is an emotional journey too. Des had gone along for the ride with Larry and not really questioned his guilt or intent. Kurt had unresolved guilt from killing people when he was in the Vietnam war. All these feelings rise to the surface as their journey continues, and they question their pasts - particularly Des who seems to have been somewhat naive. They draw close to each other and then at one point, all seems lost
Events come to a head, baddies overcome and all resolves well.
I feel that Chief Townsend not only wanted Des redemming, but also Kurt and hence his sneaky pairing of the two.

Joel really captures these stories with his narration. Townsend's voice has been the same throughout the series, which is no mean feat, and he sounds like the manipulative big fat, whisky slugging smoker that he is. Terry and Edge are distinct and Joel injects so much wistfulness into Edge's voice as he yearns for things that he has never had, like love and kindness.
In Corruption we have Kurt who is portrayed as a slightly broken uptight man and Des with his fantastic irish accent that lilts along in a carefree manner until the realisation of what he has actually done in the past hits him. I can picture the scenes and the people from his narration and not forgetting the side characters - often female that Joel pitches just right too.

Loved the books, but Joel just adds that extra something to the whole experience and enhances them. Marvellous.

Kim Fielding has a knack for writing the best and worst of "humanity".
• Chained: runs about 4 hrs 20 mins • Convicted: runs about 5 hrs 25 mins
• I'll happily listen to these again. Both stories kept me engaged, the characters interesting and their stories raw and emotional.
• Joel Leslie does a stellar performance giving each character his own voice and bringing the Bureau world to life.

I'm elated after hearing this audiobook. It's exciting, beautiful, emotional, romantic and wonderfully written. It was hard not to fall in love with the characters and I'm not one who looks for books to make them teary but I loved every emotional moment. However, these stories are more about excitement and adventure and Kim Fielding delivers. My favorite quote, "Hate shrivels the heart and burns you from the inside."

Joel Leslie is the king of narrators. All the meaning, all the color, all the nuance is served on a silver platter.

My favorite series so far! And I can't imagine a better narrator than leslie! He's so enchanting