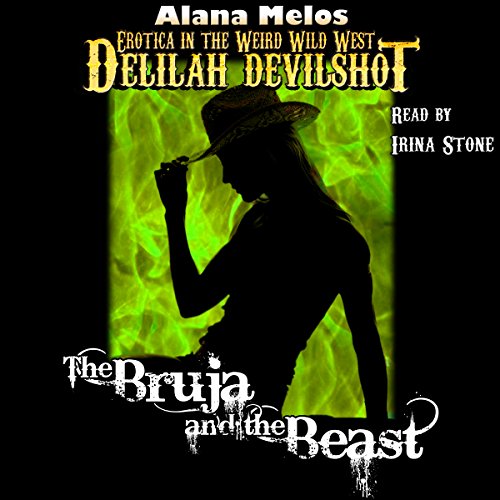 The Bruja and the Beast

Delilah's quest for vengeance is forestalled as she seeks weapons potent enough to confront her enemies...and secrets of the occult world of which she is now a part. In Mexico, she meets with a Mexican witch, called a bruja, to gain what she requires...but the bruja's help comes with a price. Recruited to stage a jailbreak, Delilah's quest, and world, get larger as she travels through southern Mexico seeking a lost civilization to help a god ascend to his power.

What listeners say about The Bruja and the Beast

Where does The Bruja and the Beast rank among all the audiobooks you’ve listened to so far?
This book is amazing from both an erotica and paranormal fantasy standpoint.which is what makes this series a favorite of mine .I would rank it up there with the Wolf Pack books by Suzanne Wright ( My favorite in this genre) this is not sweet with any love just hot ,raw and kinky and very graphic sexuality.If you like your kinky encounters with a good story and for that story to be the world of magic and where literally anything is possible then this is right up your ally!The no love part is due to Delilah, out resident gunslinger on a mission to find and defeat those who murdered her Father and Zeek she is seeking aid from a Burja( a witch )...this is after she "sold her soul" to the devil ...well a devil,Azazel .She sucks the energy for her ability to heal from the life force of others like their chi as a Succubus would(if you've seen lost girl its a little lie that just way more deadly and no guilt ) Celia our Mexican maiden ( her love for now and travel companion ) is in love with her but Delilah... vengeance is in her heart ,there is no room for love but she does faintly wonder if she will ever get make to the way she was once upon a time.Celia is taking Delilah to her Grandmother(Abuela) and does not yet know about delilahs dark dealings or her deal with a certain tall handsome denizen of hell.but when they get to dear,sweet (cough ,cough) Grandmothers house,Delilah is sent on a mission as payment for the old lady's help where she encounters a taro reader a, Sheriff who gets more than he bargins for,A chupacabra,a god,
The sexual tension between Delilla and Azazel is off the charts ,so wrong its so right no feelings except hate and desire.This book is phenomenal i just wanted
...but that's the trademark of all good sagas I can't wait for the next installment from Alana melos.
My favorite sex scene :Delilah dominates Nicholas which was very hot,really wrong if I typed what happened leading up to this but its just the way the story goes.She enjoys it and feels akin to what Azazel must feel like with her as Nicholas is technically a god now.

What other book might you compare The Bruja and the Beast to, and why?
This I seem to have already answered but I shall say again because is worth mentioning that this has the right mix of paranormal fantasy and erotica as Suzanne Wright's Wolf pack books but with out the lovey dovey feelings .This is Domination,sex,revenge and violence.If you prefer your kink in a world of tarot cards,mythical creatures,a god and goddess or two then you my friend are in the right place.

What does Irina Stone bring to the story that you wouldn’t experience if you had only read the book?
This narrator awesome when Nicholas "evolves" in to the Jaguar god and says Perfect Irena Stone says it as purrrrrrfect ,like a cat would.Im sure its written that way but still the narrator made me smile with her use of it.Her accents were fabulous .The Southern accent is hard to do without getting too much of a Southr'n drawl in the mix or to have it come off as too saccharin and sweet.The narrator pulled it off amazingly and even though Delilah and Rose were two wildly different characters she manages to make them distinct without an action or a sentence specific to that character's personality.Very commendable.The British was very well done as well.Being british it drives me nuts when the "villains " get really bad OTT British accents but this was perfect ,cultured but cocky,sly yet reassuring really fantastic.as was the subtle hispanic for Magarite( the Bruja) the Narrator also slips seamlessly between the character she is voicing and her narration voice.we could not get this quality by reading just from a page with out a doubt.Outstanding.

If you made a film of this book, what would be the tag line be?
lol my review would be rejected if I said what I was thinking.ha

Any additional comments?
I adored the Mexican Mythology!Not just the chupacabra but the temples and gods and the Bruja and Magic and so so much more.My only gripe is I wanted the book to be longer .Especially after that mind blowing epilogue(a favorite part of the book for me and I bet you will feel the same after you listen ) Plotting ,posturing ,a big reveal and the low down on Delilahs journey to come 100% not to be missed. I was voluntarily provided this free review copy audiobook by the author, narrator, or publisher.As always this is my honest opinion.

The Delilah Devilshot series only gets better!

Yes if they're a fans of supernatural and imaginative erotica!

What was one of the most memorable moments of The Bruja and the Beast?

The scene at the end after the ritual!

Which character – as performed by Irina Stone – was your favorite?

Delilah as always, is brought to life by Stone's narration! Though Azazel is a close second!

The tarot scene is quite riveting as Melos teases us with future hints to the series.

Delilah Devilshot is on a mission to avenge the murders of her father and fiance in an alternate version of the Wild West full of magic, demons, and ancient gods. To save her life and get her vengeance, Delilah made a deal with the demon Azrael. Now a gunslinging succubus who feeds on sexual energies, Delilah needs to find a way to hurt the men who killed her family—a supernatural way.

So Delilah is traveling with her lover Celia to Mexico to meet Celia's grandmother, a bruja (witch). When they arrive, the bruja will make the weapon for Delilah so long as she rescues a man named Nicolas from jail.

The only problem—Nicolas has his own plans and Delilah finds herself embroiled in the ancient plan of Mesoamerican gods. Can she trust Nicolas to keep his word or does he have nefarious plans for our succubus gunslinger?

Melos is back in her Weird West erotica series and is firing with all cylinders. The mythology builds while the various supernatural powers plot and contend with each other, using humans like Delilah as their pawns. The sex is hot as always, but interspersed with a very interesting story. The characters continue to be fascinating as Delilah struggles to understand and control her succubus-like powers Azrael gifted (or cursed) her with. As always, Melos's research into mythology and how she weaves it into her story is masterful.

This series keeps getting better and better, and I can't wait for Book 4!

Author, Alana Melos continues her story of Delilah Devilshot with this third installment. Delilah is still trying to track the gang of supernatural outlaws that killed her family and destroyed her human life. In this installment, Delilah learns more about her powers and limitations through a bruja named Marguerite. The bruja agrees to help Delilah with her goal in exchange for rescuing a man named Nicolás from jail and bringing him back safely. The story gets turned up a notch when it turns out Nicolás has an agenda of his own that will contribute to a more complex story plot.

Finally, this audiobook was provided by the author at no cost in exchange for an honest review, courtesy of Audio Book Boom.

More of the same from Delilah and in small doses, quite stimulating. Alana Melos has added a worthy representation of the genre and it was presented with flair by Irina Stone's narration. Thanks I was voluntarily provided this free review copy audiobook by the author, narrator, or publisher.

So, having not read or listened to the first book, it took me a bit to get into this one. I did, however, get sucked in and found that I enjoyed this one quite a bit. I wish it was longer, so the story could go further, but it was pretty darn entertaining.

I don't think I'd spend a credit on books this short, but if they were bundled, or on sale, I would definitely consider them.

What made the experience of listening to The Bruja and the Beast the most enjoyable?

The narration combined with the steamy story.

This Wasn't What I Anticipated...

Would you try another book from Alana Melos and/or Irina Stone?

I Most Certainly Will...

When The Witch Became A Tattoo Artist...

Book 2 Had A lot Of Intense Sex Scenes And Plot Twist That Book 3 Just Didnt Have.... I Was Very Disappointed