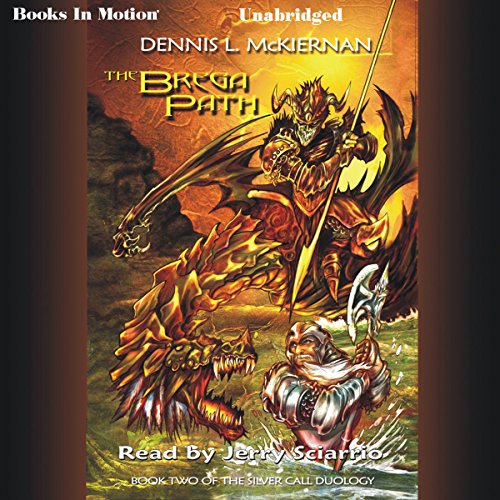 By: Dennis L. McKiernan
Narrated by: Jerry Sciarrio
Try for £0.00

Kraggen-Cor, once the heart of the Dwarf kingdom, now the mountain fastness of all the creatures of evil that remain in Mithgar. Here the Dwarf King Durek has led his forces to fufill his destiny and reclaim his realm. But with the Dawn Gate held by ememy troops and the Dusk-Door of Kraggen-Cor barred by a nightmare guardian, Durek must split his forces. He sends the Warrow Perry, the human Kian, and several doughty Dwarf warriors to chance the Brega Path, the legendary twisting way through the heart of Kraggen-Cor. With the powers of evil in pursuit, can this small band win through to Durek¹s army before the enemy springs a diabolical trap which could prove the death of all the Dwarves in Mithgar?
©1987 Dennis L. McKiernan (P)2009 Books In Motion
Epic
Show More Show Less

What listeners say about The Brega Path

A fitting ending to the story

Another great tale from Dennis McKiernan. I love the theme that even the small apparently insignificant person can prevail for the greater good and still be humble.

Great story - could use better narrator

As often happens when multi - book or related works have different narrators, the enunciation and pronunciation of many words - especially proper nouns - are inconsistent. Sometimes the pace of the narrator was a bit rushed. Otherwise, very enjoyable.