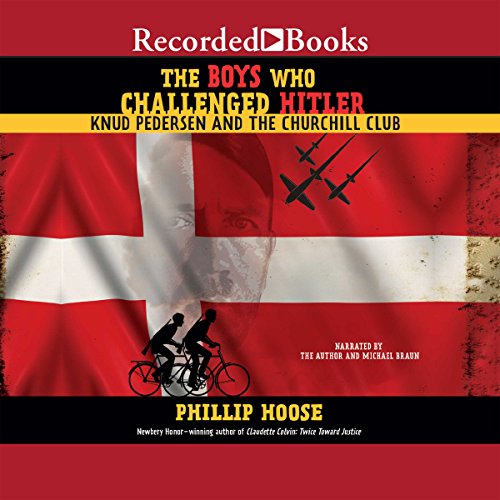 The Boys Who Challenged Hitler

At the outset of World War II, Denmark did not resist German occupation. Deeply ashamed of his nation's leaders, 15-year-old Knud Pedersen resolved with his brother and a handful of schoolmates to take action against the Nazis if the adults would not. Naming their secret club after the fiery British leader, the young patriots in the Churchill Club committed countless acts of sabotage, infuriating the Germans, who eventually had the boys tracked down and arrested. But their efforts were not in vain: The boys' exploits and eventual imprisonment helped spark a full-blown Danish resistance.

Interweaving his own narrative with the recollections of Knud himself, here is Phil Hoose's inspiring story of these young war heroes.

What listeners say about The Boys Who Challenged Hitler

What courage and determination...

Phillip Hoose is masterful as he unfolds the story of Knud Pederson and the Churchhill Club, The boys were brilliant and brave, never passing up an opportunity to sabotage the Germans, when situations presented itself. Outstanding job with the audiobook, I couldn't stop listening, fabulous all the way around!

I like history a lot and so finding a book like this was amazing I like the narration because it was dramatic and thrilling I think people who are interested in world war 2 books would love this.

very good book. I liked how it switched points of view. this was one of the best.

The Boy Who Was Inspired

Knud Pedersen the RAF club and the Churchill really inspired to make a difference in the world and I wish that I found this book earlier so I could maybe send Mr. Pedersen an email. This book has also inspired me to try and help my friends understand that even kids can make a difference and this book has inspired me to visit the resistance museum.
Thank you for doing what you did Members of the resistance group and especially you Mr. Pedersen, BUT MOST OF ALL THIS BOOK HAS INSPIRED ME TO CHANGE THE WORLD.
THANK YOU

Great. Amazing. Wow. I loved it. Cool is that enough words? Great book I reccomend it.

The story being told was very, very good. The only negative to it was the performance of the guy that spoke as Knud Pederson. He was a bit obnoxious.

If you could sum up The Boys Who Challenged Hitler in three words, what would they be?

Brave, Courageous, and Willing To Fight

What was one of the most memorable moments of The Boys Who Challenged Hitler?

When the Churchill Club would run out and mess up the signs was my favorite moment.

My favorite scene was when they found the Rifle and stole it.

No but this book did make me different. All the stuff in this book is what I have never known and now I know all about when, where, and how the war started.

This Book Was The Best Book I Have Ever Read

I liked how this book covers a part of the war that many people have never studied. Hoose kept me intriguiged the whole way through.