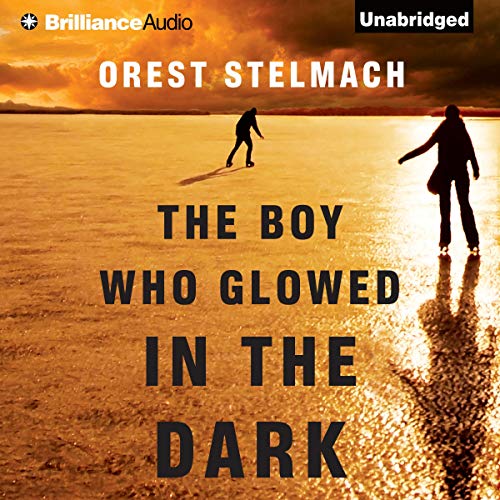 The Boy Who Glowed in the Dark

By: Orest Stelmach
Narrated by: Tanya Eby
Try for £0.00

"The fate of the world depends on us."

With one mysterious e-mail, Bobby Kungenook - the teenage hockey phenom living undercover and guarding part of a revolutionary scientific breakthrough - realizes someone else shares his secret. The sender summons Bobby from New York to a rendezvous in radioactive Japan. There, with the help of Bobby's guardian, Nadia Tesla, the two will forever alter mankind's destiny.

But dangerous people from Bobby's haunted past are hot on his heels, determined to possess what could be the power of life and death. And when the enigmatic e-mail sender, Genesis II, is kidnapped after a bloody showdown on the scarred streets of Fukushima, Bobby must tap into his remarkable abilities to pursue the brutal captors into the forbidding reaches of Siberia - and the land where his journey began.

As the Nadia Tesla series races to its stunning conclusion on the frozen shores of Lake Baikal, the boy from reactor four will claim his fate and become a legend.

What listeners say about The Boy Who Glowed in the Dark

Review of the whole trilogy

I listened to the first two books via Kindle Unlimited and bought the 3rd as I didn't want to have to struggle with the Ukranian names in order to finish the story!
I'm not here to find fault and the whole trilogy was a good romp, albeit very improbable. An entertaining diversion when I was ill.

The background history was very interesting and informative but was fitted into the story without being too clunky.

Tanya Eby does a good job of making the narrative animated and interesting. Her diction is clear and pleasant.
Unfortunately most of the protaginists are male, so she was at a disadvantage. In the first book, she did very well, with differing gruff voices and accents. However, I did find all the men sounded pretty much the same in the last book.