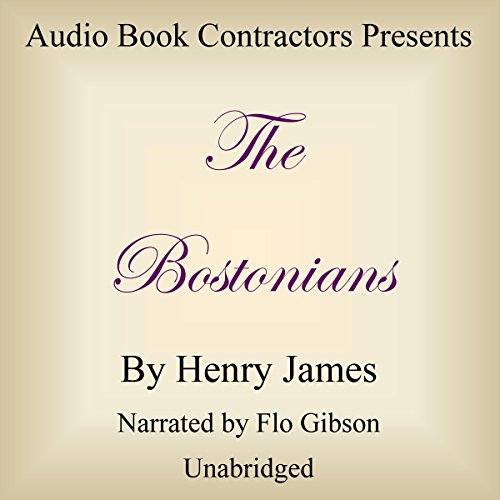 What listeners say about The Bostonians

Henry James can be tough to read in print, because his prose is labored and his stories slow-moving. Listening to a good narration can make all the difference. I very much enjoyed this early-ish novel (1886, after Portrait of a Lady and before the knotty later tomes) which, unusually for James, is set entirely in the United States.Olive Chancellor is a well-to-do, single Boston lady who represses her lesbian inclinations until she meets Verina Tarrant, a fresh-faced young woman of the lower classes. Her attempts to keep Verina to herself (there is no sex involved, of course, but she persuades the girl to live with her) are challenged by a male suitor named Basil Ransom, a distant relation of Olive's. It's not just a sexual struggle but a political one, too, for Olive's and Verina's milieu is the bohemian world of feminism, spiritualism, homeopathy, and post-abolition reform in general, and Ransom is an outspokenly reactionary Southerner.The novel richly evokes different orders of the society of the time--not just bohemians and political activists but middle-class opportunists, journalists, Harvard undergraduates, and upper-class New Yorkers, as well as the world of Ransom himself, a not very successful lawyer and writer. There aren't many novels that bring late 19th century America to life with such a keen analytical eye.I've read some reviews that claim that James was contemptuous of Olive's and Verina's world, but I didn't find that to be true. Certainly he disapproved of some elements of it, but overall I found his portrayal to be pretty even-handed. He's good at showing that "reformists" can't be characterized as a single lump because they don't all believe in the same thing.Flo Gibson's narration is a bit old-fashioned, but very good. Overall, if you're looking for an introduction to James, I don't think you can do better than this.

Quite a good James novel

No, Flo Gibson is not a good reader.

Olive Chancellor is a fascinating character

Flo Gibson's voice is very odd. Many of my friends will not buy anything read by her.

It is time that you rerecorded James. The best reader of his work is John Wood, who reads THE PORTRAIT OF A LADY