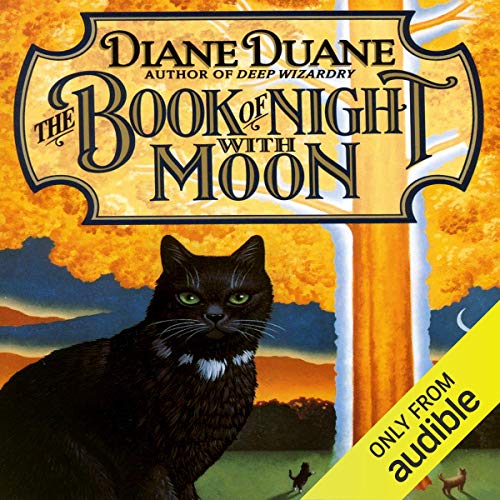 The Book of the Night with Moon

By: Diane Duane
Narrated by: Angele Masters
Try for £0.00

Rhiow seems like an ordinary black cat living in New York's Upper East Side, but little do her owners know that she is the leader of a group of cat wizards. The appearance of a troubled kitten named Arhu puts them at odds with a dinosaur wizard, whom the cats must defeat in order to save all of humanity. Angele Masters has an engaging timbre that appropriately recalls a cat's purr, and she creates indelible characterization of Diane Duane's protagonists with impressive voice work that varies from wise and tough to whiny and gruff, making this fantasy memorable and entertaining.

Rhiow seems a perfectly ordinary New York City cat. Or so her humans think - but she is much more than she appears. With her partners Saash and Urruah, she collaborates with human wizards, protecting the earth from dark forces and helping to maintain the network of magical gateways between different realities.

What listeners say about The Book of the Night with Moon

Where does The Book of the Night with Moon rank among all the audiobooks you’ve listened to so far?

I'm glad of that, because this book (the whole series, in fact, as there are two other "Cats of Grand Central" novels after this, "To Visit The Queen" or "On Her Majesty's Wizardly Service" and "The Big Meow", though the latter is available only in e-book format to date) is among my favourite fantasy tales, and my beloved paperback edition has reached a point where I think if I re-read it much more often it may fall apart, though it was only gifted to me 10 years ago.

What was one of the most memorable moments of The Book of the Night with Moon?

There are many, especially among the climactic, but to name one without major plot spoilers is difficult... Urruah and his almost un-feline fanboy behaviour over "o'hra" (Ailurin/cat slang for "opera") and Luciano Pavarotti is a favourite B-plot though, especially later. That last also works to pinpoint the fact that this story is set in 1993, when Pavarotti gave a major free concert in Central Park.

Again, hard to say without plot spoilers! Angele Masters voices all the different characters surprisingly well - I wouldn't have guessed that from the preview, which leads me to believe that perhaps a different section should be up for it (are you listening, Audible staff?) - and a particular moment when Arhu is expressing great surprise and shock at something that very much amuses the other cats around him, though I can't detail more for fear of spoiling something major, is very well-pitched in terms of the voices she's chosen to use - and, of course, in the writing itself.

Many. I dearly love this book for just that reason. But that I can voice without spoiling... Rhiow purring in Hhu'ha's lap and feeling her human essentially purring back, and much later, Arhu telling the rest of the team about the traumatic beginning to his life thaf he's consistently refused to even think about to that point, and Saash washing his ear to try to comfort him when he's done.

I love this book in its paper form, and it is just as good - if not, perhaps, even better - as an audiobook. If you know and love cats, you will enjoy this book, and probably even if you don't (but if you don't like cats, the series is called Cats of Grand Central and it's about cats who are wizards, so it might not be your thing!) - try it out! :) If you're a Potterhead or a Whovian (like the author), you'll probably have a lot of fun with this. And even if you're not, again.

All Diane Duane's fantasy tales go somewhat deeper than the average YA fantasy (though CoGC is less YA than YW, which isn't available in audio at the time of writing) in terms of examining life, death, mythology and other themes that run throughout the average lifetime - but she isn't heavy-handed about the inclusion, and they're made a very natural part of the tale.

I've read and listened to this book around five times and each time I discover something new to love about it. I first found Diane Duane through her Young Wizards series, but I honestly enjoyed this even more.

Disappointment...I was... not sure what I was expecting...Magic + Cats? I was hoping for a fantastically funny book....nope...the story line was good...but ALLLLLL the descriptions about things, just went on and on and on to the point you forgot the story line-out! Not only with the describing of what you were looking at, but also the back ground of EVERY LITTLE THING they were doing, or looking at or discussing...went on and on... I started skipping ahead...ALOT...just to get by it...However on the plus side...the narrator did a wonderful job with all the different voices and characters!

Love the narrator, something about her voice reminds me of a cat. It was interesting following wizards of another species on Errantry. Cant wait to start on the next book.

This is one of my favorite books of all time and I was so happy to find the audible version. The narrator was very good