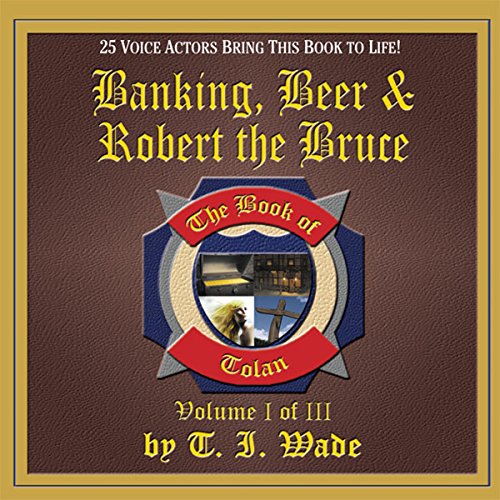 The Book of Tolan

The Book of Tolan

Banking, Beer & Robert The Bruce is a fictional novel depicting two slowly entwining families from Irish/Scottish and English descent in a humorous and real-life way. Mixing bawdy British humor and American-style action-adventure, this is good old fashioned story-telling at its best.

Volume I of The Book of Tolan begins in 1779. Murphy Patrick Tolan needs to get out of Ireland - the potato famine is starving the population. The wealthy stand-in queues for the Great Ships bound for Boston and the poor are trying to travel to the closest land over the Irish Sea, Scotland. Here they have to learn how to wear skirts, listen to screeching heavy-metal music and drink brown and horrible-smelling, gassy beer; unheard of in the Olde Country. The Tolan family survives these dilemmas and the family goes on a down-to-earth, money-making, hilarious and often poignant world journey of which most of us can only wish for in our lives.

Clearly this is not only vanity publishing but vanity reading as well - authors should never be let near their own words, especially if they are inept as this man. Diabolically awful, lousy book, lousy reading - I want my money back. The only bummer I have ever had from Audible but this is a bummer with a capital B

Where to start? Flat narration, bad French accents,trivial detail, no story line. Listening to this was punishing.

Horrible writing, horrible reading. It was supposed to be Douglas Adams esque but really missed the mark. If you want something that reads like Douglas Adams try the Anansi Boys.