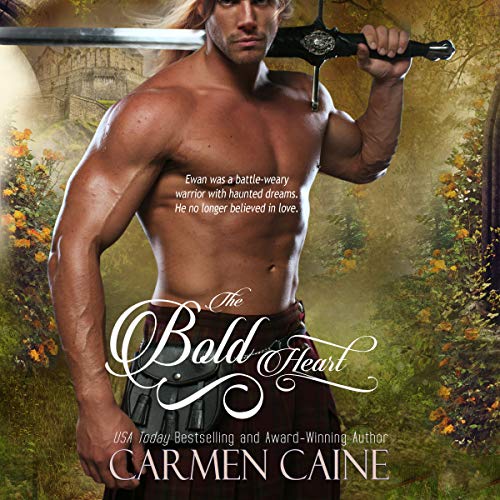 By: Carmen Caine
Narrated by: Katrina Holmes
Try for £0.00

Scotland, 1488. Ewan was a battle-weary warrior with haunted dreams. He no longer believed in love.

As Scotland's greatest warrior and heir to the earldom of Mull, few dared to cross swords with Ewan MacLean. But the price he paid for his fearsome reputation was a heavy one. To survive, he buried his emotions and became only the warrior, riding from battle to battle with his men to protect Scotland from threats within and without her borders and letting himself feel nothing else.

But when his right-hand man, Alec Montgomery, is caught dallying with a powerful lord's daughter, a trap is set. And both Ewan and Alec find themselves in an English prison, their necks headed for the noose.

On the Isle of Skye, the raven-haired Merry MacLeod spends her days caring for the clan elderly and hurtling across the moors on the back of her black stallion. A high-spirited, adventurous lass, she is no longer troubled by childhood memories of the day the braw lad Ewan MacLean rescued her from her husband, the cruel MacDonald. But when she hears the very same Ewan is now confined in an English prison, she disguises herself as a lad and sets out to repay her debt.

After a bold, mysterious youth rescues Ewan and his men from the English, the group swiftly makes their way back to Scotland. But no sooner have they embarked on their journey home than a young Prince James sounds the call to arms, rises against his father, King James III of Scotland, and plunges Scotland into a dangerous civil war.

But as they journey to join the prince, both Ewan and Alec discover their rescuer's secret - and both men find themselves falling unexpectedly in love with a raven-haired beauty.

What listeners say about The Bold Heart