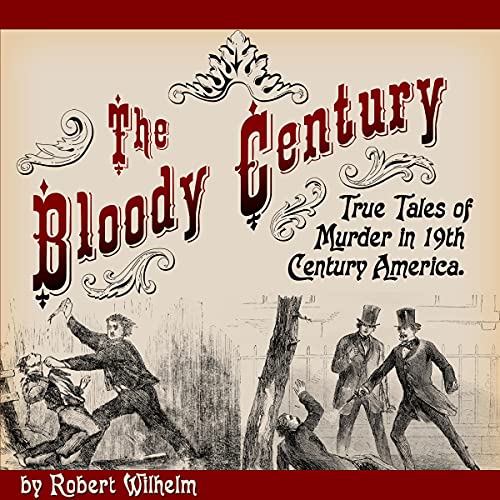 By: Robert Wilhelm
Narrated by: Charles Huddleston
Try for £0.00

A murderous atmosphere pervaded 19th-century America marked by lurid newspaper accounts and remembered in ballad and verse. The Bloody Century presents 50 of the most intriguing murder cases from the archives of American crime. It is a collection of fascinating stories - some famous, some long-buried - of Americans, driven by desperation, greed, jealousy, or an irrational bloodlust, to take another’s life.

The Bloody Century audiobook augments the true accounts of these murders with musical performances of period ballads and poems. The days of America’s distant past, the time of gaslights and horse-drawn carriages, are often viewed as quaint and sentimental. Yet, a closer look reveals passions, fears, and motives that are timeless and universal, and a population inured to violence, capable of monstrous acts. A visit to The Bloody Century may well give us insight into our own.

What listeners say about The Bloody Century

This isn’t really worth it. The murder ballads are interesting and I originally wanted the book to research that but the narrator is so goofy it’s impossible. The murders aren’t very interesting either.

And you thought the 21st century was risky!

Not only was I entertained, now I know what to do (and what to avoid) should I ever need to murder someone. It's all there - the motives, the malefactors, their mistakes - or demonstrated talent for the job. Loved it!

Fun true crime with many a twist!

Each story has an engaging beginning and a delicious twist! Well read and fun to listen to- I listened in my car and I was riveted. I would recommend for lovers of all mysteries!

Beautifully organized and wonderfully narrated. If you enjoy true crime, you are probably already familiar with Robert Wilhelm's work, but this audible version is further enriched by the voice of Mr. Huddleston narrating and singing songs inspired by many of the murders. Thoroughly enjoyable!

These stories are well researched and exceptionally well written. The reader skillfully captures the mood and nuance of each tale. You are drawn into each particular controversy as if you were in the room yourself. And the music is a delightful extra bonus. I found the audible book exceptionally enjoyable!