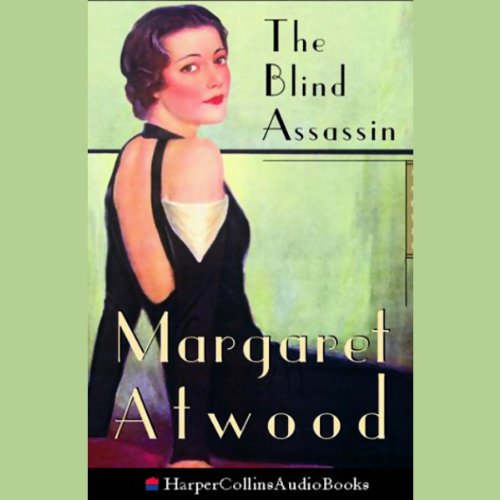 Laura Chase's older sister Iris, married at 18 to a politically prominent industrialist but now poor and 82, is living in Port Ticonderoga, a town dominated by their once-prosperous family before the First War. While bewailing her unreliable body and deriding those who try to help her, Iris reflects on her far from exemplary life and her perilous times, but in particular on the events surrounding her sister's tragic early death.

Chief among these was the publication of The Blind Assassin, a novel which earned the dead Laura Chase a dollop of notoriety as well as a cult following: as Iris says, she herself lives "in the long shadow cast by Laura". Sexually explicit for its time and place, The Blind Assassin describes a risky affair in the turbulent '30s between a wealthy young woman and a left-leaning man on the run.

"[A] superb reading by Lorelei King." ( The Observer)
"Atwood has never written with more flair and versatility than in this multidimensional novel. A brilliant accomplishment." ( Sunday Times)

I read the Handmaid's Tale when younger but this is the first Margaret Atwood I've 'read' for many years and I thoroughly enjoyed it. What seems at first a series of disparate stories and a bit slow perhaps builds into a gripping conclusion. By the end I couldn't wait to get back on the motorway and find out what happened!

The narration is excellent and I thoroughly recommend this.

Better as an abridged version

Having tried for around 4 years on and off, to read the unabridged book and struggling to engage with it, I finally decided out of pure bloody-minded determination to finish it one way or another, to listen to it instead, and in abridged form as I didn't know if I could handle trudging all the way through the hundreds of pages I'd already read but in audio, just to refresh my memory of the story so far, and my am I glad I did! What an excellent book! I feel haunted by the end of it, and the slow plot reveal in the last quarter was excellent. It seems I actually gave up on the original version just before it got good, but there was no way I could have known that beforehand. Lorelei King as narrator was also excellent, with her changing characterisation in the voices of each character almost sounding like a full cast as opposed to one person. Very enjoyable all round

The 2000 Booker Prize Winner that actually justified the plaudits and, despite a striking front cover, never managed to make it to the silver screen. Port Ticonderoga is well rendered and the central characters Iris Chase, and her sister Laura more moving and convincingly portrayed than McEwan?s 2001 Briony Tallis and her sister Cecilia.
The novel takes the form of a gradual revelation, illuminating both Iris' youth and her old age before coming to the pivotal events of her and Laura's lives around the time of the Second World War. As the novel unfolds, and the novel-within-a-novel becomes ever more obviously inspired by real events, it becomes clear that Laura's novel isn't what it seems; it is eventually revealed that Iris herself, not Laura, was the novel-within-a-novel's author and protagonist. Does all of this sound a little familiar?? Followed up recently by the wonderful The Penelopiad ? which I saw when toured by the Royal Shakespeare Company, Margaret Atwood is certainly Canada?s finest and this book is a gift for all readers who look a little behind the curtain of hype and reputational deference.

A story of revenge and redemption, multiple storylines weave together in a haunting symphony as Iris, the elderly protagonist recites her small but compelling story. Highly recommended if your taste is skeward toward the slightly unusual.