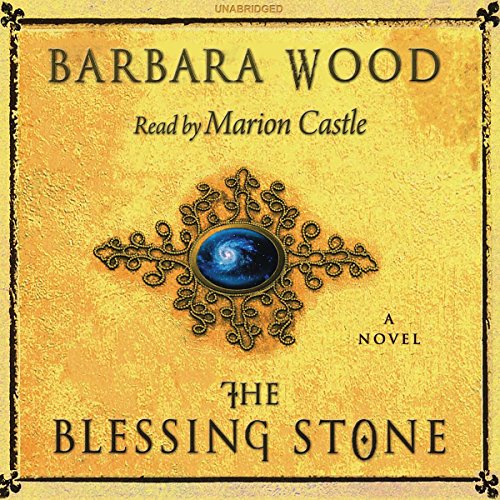 Millions of years ago, a meteorite fell to earth and shattered, revealing a beautiful blue stone. One hundred thousand years ago, a girl named Tall One found the crystal on the African plain, and it formed her destiny - as well as the destiny of generations to come. From ancient Israel to Imperial Rome, medieval England to 15th-century Germany, the 18th-century Caribbean, and the 19th-century American West, the destiny of the stone and the history of the world unfold. Each story is full of the betrayals and obsessions of the human heart and the quests of the human spirit.

In The Blessing Stone, Barbara Wood has both told the intimate details of her characters' lives and created a sense of the epic sweep of human history.

"Wood ( Perfect Harmony) pulls off an unlikely feat with this sweeping epic about the history of humanity, from the first Homo sapiens to 20th-century Californians." ( Publishers Weekly)
"In her latest book, Wood, who is well known in Europe for her epic novels ( The Prophetess), chronicles human development by following the passage of a precious stone throughout history.... In each era, Wood creates genuine, engaging characters whose stories are fascinating although a bit uneven in the later episodes. This novel should earn Wood the larger audience in the United States that she deserves." ( Library Journal)
"Wood's subject is nothing less than the history of the entire world, from three million years ago to the present.... All in all, an absorbing adventure tale." ( Booklist)

What listeners say about The Blessing Stone

Read book years ago and it stayed with me

I’ve read many of Barbara Wood’s novels and this one made such an impact on me. I’ve found myself thinking about it many times in the years since I read it. It is so intimate at every time period, yet so diverse. It really is an anthology of historic novellas, with each one doing justice to it’s era, characters and story. Because I thought about it so often, I wondered if it was an audiobook now, and it was! The narration is perfect and only amplifies the power and beauty of the book. I may listen again and am definitely sending to people whom I know will love.

One of my all-time favorite books!

Although the first chapter or two might be a bit slow please hang in there. Once this book gets going you just can’t stop listening. I regionally read the print version of this year’s ago and was so excited to find the audio version. This audio version was done so well I enjoyed it more than the print version.
The book spans thousands of years and is like a bunch of mini books all wrapped into one. Each mini story contains so much drama, humor and excitement. I highly recommend this book to anyone who enjoys historical fiction.