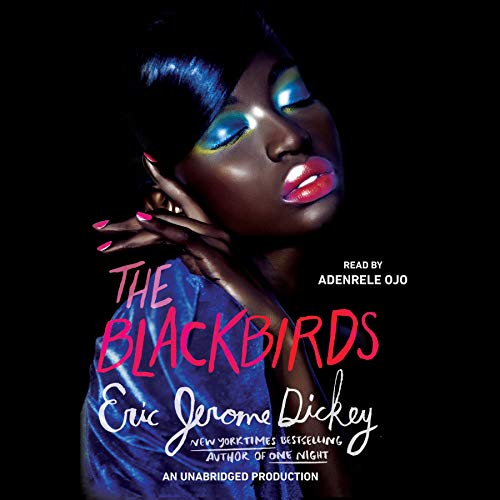 By: Eric Jerome Dickey
Narrated by: Adenrele Ojo
Try for £0.00

They call themselves the Blackbirds. Kwanzaa Browne, Indigo Abdulrahaman, Destiny Jones, and Ericka Stockwell are four best friends who are closer than sisters and will go to the ends of the earth for one another. Yet even their deep bond can't heal all wounds from their individual pasts as the collegiate and postcollegiate women struggle with their own demons, drama, and desires.

Trying to forget her cheating ex-fiancé, Kwanzaa becomes entangled with a wicked one-night stand - a man who turns out to be one in five million. Indigo is in an endless on-again, off-again relationship with her footballer boyfriend, and in her time between dysfunctional relationships she pursues other naughty desires. Destiny, readjusting to normal life, struggles to control her own anger after avenging a deep wrong landed her in juvi while at the same time trying to have her first real relationship - one she has initiated using an alias to hide her past from her lover. Divorced Ericka is in remission from cancer and trying to deal with two decades of animosity with her radical mother while keeping the desperate crush she has always had on Destiny's father a secret...a passion with an older man that just may be reciprocated.

As the women try to overcome - or give in to - their impulses, they find not only themselves tested but the one thing they always considered unbreakable: their friendship.

What listeners say about The Blackbirds

Loved this story, felt so genuine and heartfelt like I was reading a true life story. An inspirational story about a sisterhood of women and all the trials and tribulations that they face in love, careers, family, friendship and so much more as modern day black women. I thoroughly enjoyed reading this book, I listened to it everyday until I finished it. I think it's my new favourite one out of all Jerome Dickey's books!! Such a beautifully written story!!

The narrator is absolutely awful, her voice makes every sentence sound like a question. Her Nigerian accent sounded more Zimbabwean but by any standards was below par.
Once I got comfortable with the uncomfortable, the story was alright. Definitely not up to EJD standards books like chasing destiny, girlfriends, or any of the other wonderful dickey books i've read.
I chose this book out of the newer EJD books because I wanted hours of entertainment, once I heard the narrator though I wished I'd chosen different. But I stuck with it!

The beginning was a little slow but once into the book i couldn't stop, feel like each character had their own issues and secrets they had to deal with but the love of women in a sisterhood will keep you strong. Brilliant read looking forward to the next book

I love EJD books and have read every single one of them via hard copy. This is my first audiobook by him. This is so disappointing. For 35+ agonizing chapters of listening to the narrator's voice. She tried to make the girls sound young as oppose to mature women yet Indigo sounded like an African man - very harsh. There was no feminist to her. I rated the performance a 1 bc I couldn't give it a zero.

Reminded me of Sex and the City or Girlfriends

Eric Jerome Dickey has a powerful command of his portrayal of relationships. It was very relatable and emotionally gripping. I laughed at some parts, shook my head sometimes and I cried at parts. This book was like Sex and the City or Girlfriends. This plot revolved around a sisterhood featuring Kwanzaa Browne, Destiny Jones, Ericka Stockwell and Indigo Abdulrahaman. These best friends have seen each other through various phases of their lives and now they have made a pact to celebrate each friend in a special way on their respective birthdays.

The narrator took awhile to grow on me because her Indigo voice felt comically fake but I eventually got comfortable enough that it didn't affect my enjoyment of the storyline.

The love the ladies had for each other really made this story endearing. The author writes really memorable characters and this one was no exception. I love the resolution in the conflicts each character was dealing with and felt each woman was in a much stronger place emotionally than they were at the beginning of the book. My only complaint, which is a consistent one with this author’s book, is the length. It was too long and it would have been even more powerful with a trim.

This story will still command your attention from page 1. If you want The Girlfriends experience, then pick up this audiobook now.

Truly written by a man

Be prepared for a sex scene in just about every chapter. way over the top.

This super long book had a hard time keeping my interest. However, I pressed on thinking that it would turn up at the end. EJD books usually have really good endings. It didn't. It was just sacked with a bunch of filler content that really went no where. Endless amounts of useless details and conversation. This book could have been oodles of chapters shorter without all of it. My expectations were way off. I thought the flu like symptoms that Indigo had would lead to non curable std from her cheating baller on again off again bf. Nope! I thought she would discover this by spying on him with the phone. I thought Destiny would discover her meds or paperwork when Erica told her to go to Indigo's to look for condoms. Nope! I thought Erica would end up killing herself and/or mother and possibly Indigo's dad. Nope! Or find Mr. Jones dead in his sleep due to illness complications . I expected more to develop from the Kwanzaa lawsuit and new beau. Nope! Destiny's storyline did ok, I guess. However, it fizzled too. This read was pretty much three days of my life I can't get back. Normally, I LOVE EJD books, but eh on this one.

This story has the classic Dickey elements but with the details of great female friends. I love that these women have developed a beautiful support system wrapped in a little bit of wild and crazy.

long... for no real reason.

Struggled to listen... a lot of detail in all the wrong places. The narrator did well. But, it reminded me why I have gave up on EJD books. blah.

too slow I have no other words other than I want my money back and hours spent on this book.

EJ Dickey has a beautiful style of writing that incorporates current issues and topics so seamlessly into his books. This book was just too long and sometimes too preachy. I stuck with it… All 18 hours of it, because I do love and respect EJD's writing. I've been a fan since the 90s. Perhaps I have outgrown him, though I feel like he is a writer who has grown as well. Guess we've just grown in two different directions. That's not a bad thing it's just not a good thing for me.

This book started off at a four stars for me .It had funny moments. I enjoyed the girlfriends dynamics, but some of the dialogues was way too long and overwritten that I became bored and sped up the narration which was a shame bc that was the best part. The back and forth argument with Erica and her mother, The long drawn out feelings about Mr Jones. It just went on for too long, I got the point. I ended up speeding the narration through just to get it over with. The narrator was amazing. This book good have gotten five stars, even four if it wasn’t so much unnecessary dialogues going on

slow, long and infested with filler

I have read many EJD books before but this was by far the slowest read for me. It was inexplicably slow and infested with filler that made it an extremely long read that ultimately lead to anticlimactic endings for all the women. I also found Indigo particularly annoying and it was a rough ride to complete for me.