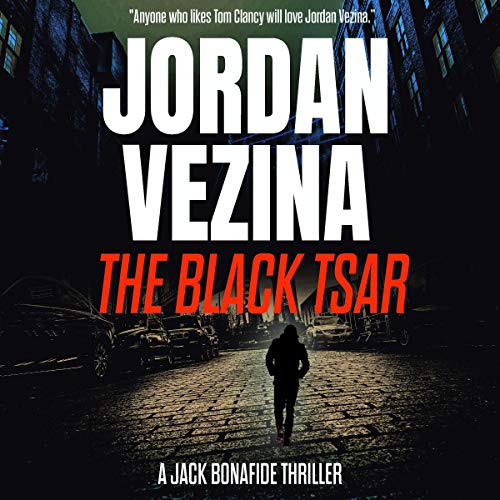 By: Jordan Vezina
Narrated by: Shawn Milo
Try for £0.00

Even within the intelligence community, the Black Tsar was considered to be a myth - the most powerful hydrogen bomb in human history, secretly constructed by the Soviets and capable of near-biblical levels of human destruction.

Only, the Black Tsar was never a myth - and 20 years after the weapon went missing from a darkened warehouse in Sarov, Russia, it's now been tracked to somewhere within the United States.

It is 1982, the height of the Cold War, and two rival factions of the KGB are each trying to find the legendary Black Tsar and seize control of this "gun to America's head" before the other.

Only Sergeant Jack Bonafide stands in their way.

But Jack would be the first to admit he's not the man he used to be. A former member of the legendary Delta Force, he's far from combat-ready, he's already skating on thin ice in his new assignment with the CIA, and the only man he can trust is his deeply troubled brother, Mac.

The stakes have never been higher, the future of the free world is in question, and the buck stops with the Bonafide boys.

Yet, meanwhile - somewhere out there - the Black Tsar's countdown has started ticking.

What listeners say about The Black Tsar

I thoroughly enjoyed this listen. Taut writing with pace. Plenty of action and twists. Ready to listen to the next one!!

I loved this audiobook. Which is strange because normally I pass on the spy novels. But this one was fantastic. It was so funny, dramatic (in a good way), action packed, and left the reader wanting more. Now I'm really hoping I can find the next book! And the narrator did an amazing job. All of the voices and accents were very well done! I want to say more but I don't want to give anything away, and there are some many things in this book that happen that you would never expect. So I will just say that I am a big fan! And if you want something fun and exciting, you definitely should pick up this audiobook.

This book was given to me at my request. I am providing a voluntary and honest review.

The Black Tsar.
Great entertainment, action packed and ultra high speed.
loved the book and the narration.
Hope it becomes a movie.
I was given a free copy of this audio book at my own request, and voluntarily leave this review.

Set in about 1980 this book was a bit hard for me to get into... the traditional 1980s Russia is the enemy, combined with no cell phones or internet— at the same time, the situations and prose was very modern.

I liked this book on its own merits. The last hour or so, though, was an add on to set up a series — it didn’t really contribute to the plot of the stand alone novel, and it left off it felt like the end of the opening of another novel. While I found that a bit annoying... because I kept wondering where we were going to see the end of the original plot, it is much better for me than the books that don’t actually resolve anything in order to build the series.

Interesting plot. Interesting character development. Lots of action. Narrator contributed to building intensity in key scenes and did well at keeping me immersed in the book.

The black Tsar is a good book to relax and listen to. It has a decent story along with action and a few twists along the way. Jack Bonafide is a sort of modern day John Wayne type character trying to save the country. I look forward to listening to the rest of the series to see just what sort of crisis Jack gets himself involved in.

I chuckled, cried, cheered....was totally invested in the characters....loved that this book touched on Vezina's other excellent series. so, more Vezina books to listen to and buy!! 😊😊😊

I gave up before the third chapter!

The main reason I quit listing is because of the many times the author took our Gods name in vain. I will never purchase another one of his books! Oh, and it was boring also.