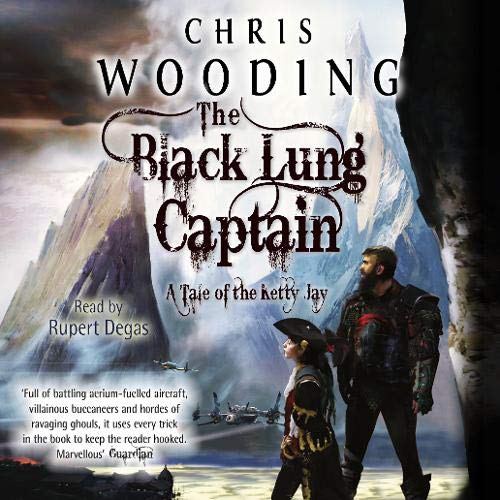 By: Chris Wooding
Narrated by: Rupert Degas
Try for £0.00

Darian Frey is down on his luck. He can barely keep his squabbling crew fed and his rickety aircraft in the sky. Even the simplest robberies seem to go wrong. It's getting so a man can't make a dishonest living any more.

Enter Captain Grist. He's heard about a crashed aircraft laden with the treasures of a lost civilisation, and he needs Frey's help to get it. There's only one problem. The craft is lying in the trackless heart of a remote island, populated by giant beasts and subhuman monsters.

Dangerous, yes. Suicidal, perhaps. Still, Frey's never let common sense get in the way of a fortune before. But there's something other than treasure on board that aircraft. Something that a lot of important people would kill for. And it's going to take all of Frey's considerable skill at lying, cheating and stealing if he wants to get his hands on it....

Strap yourself in for another tale of adventure and debauchery, pilots and pirates, golems and daemons, double-crosses and double-double-crosses. The crew of the Ketty Jay are back!

What listeners say about The Black Lung Captain

I was eager to return to the Tales of the Ketty Jay. Book 2 has everything I liked about "Retribution Falls" and continues with some surprising, exciting and poignant new arcs for some of the less explored characters in the last book. Once again, Wooding beautifully introduces a variety of locations across the diverse world he's created, as the crew persue a new goal with adversaries both old and new.

What I especially liked about this book was the way in which some characters remain no more 'likeable' than before (I'm looking at Pin and, to an extent, even Darien Frey himself) but you are still drawn into rooting for them. In particulare, the sub-plot between Harkins and Slag is a masterclass in creating a brilliant and hilarious story out of a relatively trivial aspect of the picture.

I enjoyed every minute of it, and it almost goes without saying by now that Rupert Degas is one of the best audiobook narrators in the world. The sheer diversity of voices he gives to the characters and the flawless reading is a sheer delight.

I've already queued up the next one.

I thought that it was a very good performance by the narrator Rupert Degas. I enjoyed the story as well. I found this second book in the Ketty Jay series to be just as strong as the first one.

I doubt Rupert Degas could do a bad job narrating anything. He's amazing doing everything from Murakami to Rothfuss. He come across as a storyteller rather than a narrator.
This sequel is a most entertaining story and I look forward to more. Most highly recommended!

loved it, from start to finish! the narration was like a whole cast of people! When's the next one out?.

It's no literary classic but it's entertaining.
Excitement, adventure and some funny one-liners kept me looking forward to the next listen.
As always, Rupert Degas does a great job.

Addicted to the ketty jay...

... and all who sail on her!
Fabulous fun, great adventure and wonderful snippets of laugh-out-loud humour.
Enjoyed the first book, but this was even better. Loved it. Downloading the next one right now.

I love that the characters are just getting better and better. Brilliant storytelling and character development. Great narration too!

Fantastic narrator, fantastic tale! Rupert degas does such a great job with all the different characters, consistent throughout

Super sequel that gets better and better

Fantastic read and excellent narration from Rupert Degas. Glad he has narrated the entire series of books. Super sequel that really develops the characters and world from the first book.

Another fantastic work by CW and RD.

I wrote a review about Retribution Falls after I heard it making it clear I felt it was one of the single best forms of pure entertainment in any genre that I have ever experienced. The Black Lung missed that top end excitement of discovering for the first time something wonderful you never knew existed but adds an emotional depth needed for characters to grow and develop into new and better centerpieces for the next stories.

This book is for those looking to escape for a laugh or a cry into a world of gamblers, cultists, drunks and cut throats...basically your average group of friends.

Just—so much fun. Worth more than 1 credit

For all the waste bin fodder I find on audible it’s a shame that series’ as good as this haven’t garnered more attention. I mean, I’ve listened to some real crap—crap with 10k+ 5 star reviews—and I just can’t say enough how thoroughly entertaining the Ketty Jay books are (Black Lung Captain is my personal favorite). The characters have some of the best, most cohesive arcs I’ve seen. The world building is fascinating. The action is enthralling. The magic, demonism, so interesting and with such high stakes! The tension throughout much of the Ketty Jay books is dark and tight and Wooding plays it like a master violinist. If I sound overly wordy I’m sorry, but I can’t encourage you enough to invest in these books. They are more than worth your credit.

For those in search of light, heady action played out over the multiple landscapes of a rich and face paced world, where the action moves as quick as the aircraft these stories are Centred around!
A solid follow up to the first book, good healthy swashbuckling adventure at its best! We may never get another Firefly, but with luck Wooding will maintain this quality for many novels to come!

Honestly I wanted to love this book. The narrator was amazing, the world and story are pretty awesome. Very reminiscent of Firefly. But I'm tired of main characters being weak, whiny, sorry excuses for human beings. You have an evil character, that has betrayed again and again, tried to kill you AND YOUR CREW numerous times, but you'll let thousands of innocents die, potentially even your crew just because it requires the evil character die. All because you had a fling with said character. But I'm sure it'll work out fine because, plot armor.

Just once I'd love for there to be realistic consequences to weak, stupid characters making weak, crappy decisions. Relying on an otherwise interesting character's stupidity to advance the storyline and create drama is just plain weak writing.

Wooding’s second offering, like his first, jumps all over the steampunk-punkish world from rain forests to the North Pole- relatable characters told in excellent character voices- the plotting turns and twists and covers more ground than you would expect in a mid-length story. Imaginative and humane. Likeable villains, flawed heroes, hopeful romance - hopeless quests - good stuff!

Im sure if you liked the first one you will love the second one!

Fantastic story! Exciting and action-packed, with a tiny dash of romance. Simply wonderful. 👏 👏

A new adventure for the Ketty Jay and crew that further develops the back story of the crew in variant degrees, making the listener care more about some and dislike others – however the contrast adds to the storyline and demonstrates the challenge of getting a rag tag group to work together. Good production quality and excellent narration. Story is complex enough to be mysterious and exciting, without being too hard to follow. A fun romp.

Book 1 was an exciting adventure novel that had an interesting setting and really endearing characters and growth.

The first half of Book 2 is more of that, exactly what you want, but the second half is completely replaced by cringeworthy romance drivel. I have no problem with Romance in books, it's only a problem when it makes your main protagonist whom in this case is a grown middle-aged man, has his behavior and mannerism reverted to that of a teenage boy for a sizeable portion of the story, throwing any previous character growth out of the window.

I wish I was joking, but halfway through this book takes a completely different turn from Book 1 and it turns primarily into an awkward romance novel that reverts the character growth made in Book 1 of the protagonist and makes him a genuinely unlikeable fella who will sacrifice ANYTHING for "The Love of his Life", and has no business sitting in a leadership role because his mind is consumed.

If it wasn't for the supporting characters being as endearing as they are, I wouldn't have put up with this. Freys character takes a NOSEDIVE due to poor writing in this book, but the others are lifted to balance it out. Their struggles and resolutions carry this book, while Frey's arc does it's utmost to drag it down.

I am harsh but that's only out of disappointment for a series that had such a strong start. Hopefully Book 3 will pick up the slack.

The second installment in the Ketty Jay series was a worthy successor. It's a nice balance of action adventure and character development. The narrator does a masterful job of differentiating all the voices so that it's always clear which character is speaking. Brilliant! I can't wait to start the next book.