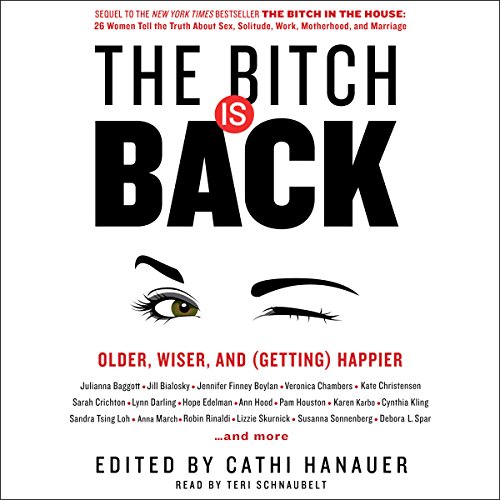 The Bitch Is Back

By: Cathi Hanauer
Narrated by: Teri Schnaubelt
Try for £0.00

More than a decade after the New York Times best-selling anthology The Bitch in the House spoke up loud and clear for a generation of young women, nine of the original contributors are back - along with 16 captivating new voices - sharing their ruminations from an older, stronger, and wiser perspective about love, sex, work, family, independence, body image, health, and aging: the critical flash points of women's lives today.

"Born out of anger", the essays in The Bitch in the House chronicled the face of womanhood at the beginning of a new millennium. Now those funny, smart, passionate contributors - today less bitter and resentful and more confident, competent, and content - capture the spirit of postfeminism in this equally provocative, illuminating, and compelling companion anthology.

Having aged into their 40s, 50s, and 60s, these "bitches" - best-selling authors, renowned journalists, and critically acclaimed novelists - are back...and better than ever. In The Bitch Is Back, Cathi Hanauer, Kate Christensen, Sarah Crichton, Debora Spar, Ann Hood, Veronica Chambers, and 19 other women offer unique views on womanhood and feminism today. Some of the "original bitches" (OBs) revisit their earlier essays to reflect on their previous selves. All reveal how their lives have changed in the intervening years - whether they stayed coupled, left marriages, or had affairs; developed cancer or other physical challenges; coped with partners who strayed, died, or remained faithful; became full-time wage earners or homemakers; opened up their marriages; remained childless or became parents; or experienced other meaningful life transitions.

As a new wave of feminists begins to take center stage, this powerful, timely collection sheds a much-needed light on both past and present, offering understanding, compassion, and wisdom for modern women's lives, all the while pointing toward the exciting possibilities of tomorrow.

What listeners say about The Bitch Is Back

The narrator was excellent. For me it was also a journey of age. Interesting to hear other womens experience with one of lifes most difficult situations. I loved and valued the last story the most. Full of wisdom we can change and grow into new older challenging women or get lost in our wrinkles and sagging skin.

Not my usual fare, I was blown away

I'm a novels sort of person, less nonfiction and never relationship or self help stuff. However I've decided to try some new topic areas and selected this based on the strength of the recommendation inside the "All Or Nothing Marriage". This was fantastic, widely diverse viewpoints, and I can't stop recommending it to my friends.