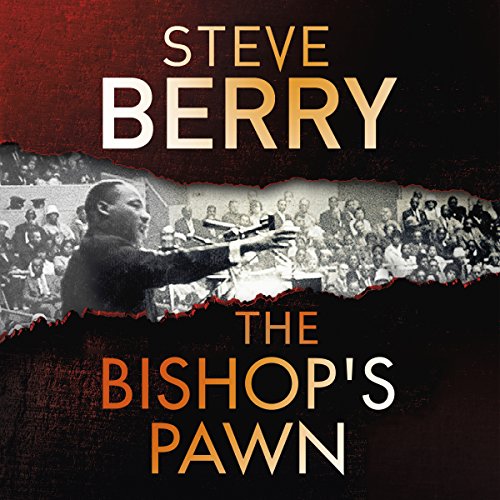 This audiobook is an expanded, annotated 'writer's cut' edition of The Bishop's Pawn, including fascinating behind-the-scenes commentary read by author Steve Berry.

On the 50th anniversary of the death of Martin Luther King comes the explosive new thriller from international best seller Steve Berry that sees Cotton Malone return to his very first case.

History notes that the ugly feud between J. Edgar Hoover and Martin Luther King Jr., marked by years of illegal surveillance and the accumulation of secret files, ended on April 4, 1968 when King was assassinated by James Earl Ray.

But that may not have been the case.

It all turns on an incident from 18 years ago, when Malone, a young navy lawyer trying hard not to live up to his maverick reputation, is asked by Stephanie Nelle at the Justice Department to help with an investigation.

He soon discovers that the department and the FBI are at war over a hugely valuable rare coin - and a cache of secret files containing explosive revelations about the King assassination, information that could ruin innocent lives and threaten the legacy of the civil rights movement's greatest martyr.

Malone's decision to see his first case through to the end - from the clear waters of the Dry Tortugas to the halls of power in Washington, DC itself - changes not only his own life but the course of history.

What listeners say about The Bishop's Pawn

Disappointing addition to the Malone series...

The Cotton Malone Series is one of my favourites, however I must admit I was disappointed by The Bishops Pawn.
The story centres on the assassination of Martin Luther King, and its aftermath - which became the focus of Malone's first assignment for the Justice department. The conspiracy offered by the book is compelling, but I just didn't think it had the excitement and intrigue of previous Malone stories.
Berry changes the format and the book is written in the first person - through the eyes of Cotton. It was okay, but just wasn't as good as the previous format. Likewise, we get a writers note before the story starts, which I found to be confusing and too much to take in - as Berry jumps through the book separating fact from fiction. I enjoyed that aspect in previous books - but it was at the end of the story - and just worked better. Berry continues his snippets between chapters too - which whilst helpful, does disrupt the flow.
I hope Berry reverts back to previous formats in the next adventure.
Superbly narrated by Scott Brick once again.

Different, but enjoyed it.

I found the first person narrative enjoyable. I normally like the different location stories but this was a welcome change. I did not like the writers note before the chapter. It was like a spoiler for every chapter. After is better.

Although the extra bits of info from Steve Berry are useful, I don't particularly like them as it disrupts the flow of the book.

I would also put the writer's comments at the end.

Audile should give the choice to download a version with the author chipping in the whole time. it really spoils the flow. Scott Brick is a wonderful narrator.

Unfortunately for me I had already bought the last few remaining books so have have to suffer through the constant interruption.

Jump past the fact versus fiction and come back

I loved the book and the production, however for some reason the fact vs fiction was added at the beginning instead of at the end. This makes no sense as we don't know what is being referred to. Nearly turned it off as with no background it sounded like yammer yammer yammer. However i came back afterwards and enjoyed it as it now made sense to me.

I love this aspect at the END of the book. Also enjoying the little tidbits added during the book.

Loved the story and enjoy learning more history from Steve Berry's books than I ever did in history at school.