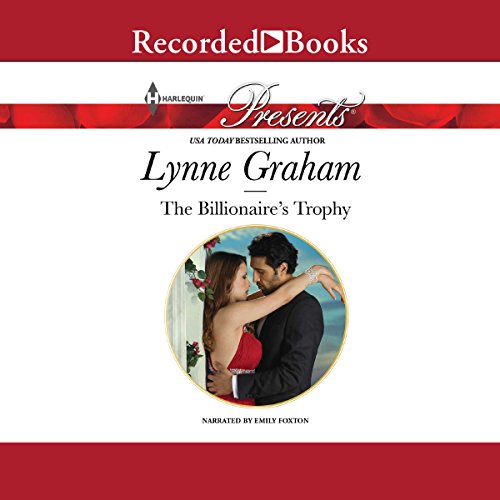 By: Lynne Graham
Narrated by: Emily Foxton
Try for £0.00

What is his intern's photo doing on an escort website? Bastian Christou doesn't know if he's more surprised by her double life or her stunning photo - she's kept those curves well hidden! He has an ex-fiancée to keep at bay, and Emmie Marshall might just be the best armor money can buy.

Emmie is outraged when Bastian, her uncompromising boss, confronts her. She had no idea her photo was online. But his check's been cashed, and he's come to collect his prize: a weekend in Greece. With her. Alone. Their relationship might be fake, but Emmie's trepidation is all too real!

What listeners say about The Billionaire's Trophy

Standard romance. Could of done with some twists on the familiar modern romance plot. Average story.

I loved the book, not even a little bit of regret on buying it
The narrator describes and carries that story with grace and joy, although I didn't like some of the accents she was making I could enjoy everything throughout the book
The author also didn't fail to write such a sweet and amazing story, loved it

The book was good, not Graham's best but still good. It was the narrator though who made this a great listen. Her voices are superb in my opinion. You can tell when she's reading vs when people are talking, you tell the difference between different characters & her make voices are believable. I'll definitely look for more books read by this narrator.

The Billionaire's Trophy was entertaining it held my interest right through. I liked Ellie and Bastian and the narrator was good.

I love Lynne Graham books and this was exactly what I was hoping for. A good read. well... A good listen really. Just what I love about her as an author. The narration by Emily Foxton was excellent as well.