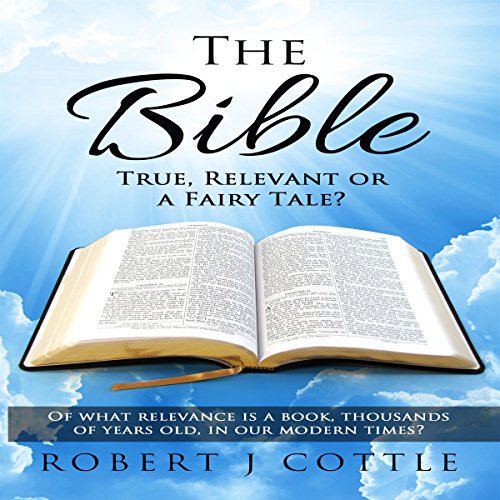 The Bible is constantly condemned as outdated, legalistic, and irrelevant, yet it's widely owned and cherished worldwide. Despite ownership it often lies unread and scarcely believed, even by Christians. The reason - it's not accepted as the infallible word of God, but worse many reject it as fictitious and immaterial.

This book directly addresses the truth and relevance of the Bible and questions issues such as:

Paul tells Timothy, "all scripture is God breathed," and in Genesis we read, "God breathed into his nostrils the breath of life, and the man became a living being." If the followers of Jesus inhale the God-breathed scriptures their souls will truly abound with life. This book sets out to inspire Christians to believe God at his word.

What listeners say about The Bible

Excellent recordings. We love Robert 's listening of the Bible, (My wife has visual difficulties; this has met an urgent need for her). We have given it as gifts with great feedback. A wonderful actor who shares the Word with meaning and sincerity. The best rendering by far.

One of the most inspiring books I've ever listen.

Author Robert J Cottle writes with such wisdom, love, and insight into the human condition. I don't want to sound over-the-top hyperbolic about this audiobook, but I believe it has the potential to have life-changing effects on readers who let the thoughts in.

I love this audio book

I love the way this audiobook speaks to me on every level. it is consistent with the non-dual teachings I've received and benefited from for decades while providing startling new perspectives and guidance that have been helping me to be much more successful in applying all that I've received to daily challenges. I am especially grateful for the guidance on relating to a story, thought or feeling that one is identified with. This has enabled me to more effectively accept, understand, and transform old mental/emotional patterns that have caused a lot of pain in my life.

I had been looking for the perfect bible to do art journaling in, and I finally found it. This bible comes with its own coloring pages, plus it allows you to do your own journaling and art on pages with blanks abound. I love the bible. There is nothing like finding the perfect bible that I know I will use year after year, and mark my areas of learning and growth so that I can pass this on to my daughter at some point. She will be able to see my journey, and maybe document some of her own. Thank you !!

This is an excellent audiobook on the subject of purity lifestyle. Parents, please talk to your children before the world does it for you. This is an honest audiobook that touches on the subjects that all of our young adults/teens/ and yes, even youth are facing today. The entire audiobook focuses on the truth laid out before us in Gods Holy Words on the lifestyle that He wants for each of us.

Incredible amount of evidence that proves the Bible is the word of God and can be relied on completely.