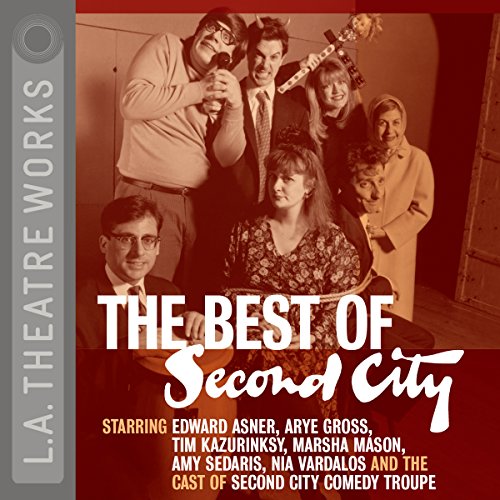 The Best of Second City

The Best of Second City is an unforgettable ride through decades of hilarity, packed with classic sketches that helped make this America's foremost comedy troupe. Dubbed "a temple of satire" by Time magazine, The Second City has been convulsing audiences since its founding in Chicago in 1959. The troupe leaped to fame by lampooning every aspect of modern American life with brilliant, improvisatory sketches on subjects ranging from salad bars to affairs of state. Wave after wave of talent emerged from The Second City, including Mike Nichols, Gilda Radner, Dan Aykroyd, Bill Murray, and John Belushi. Now you can share in the rich comic legacy with more than four hours of vintage sketches and new material, performed by current members of The Second City and distinguished guest alumni Edward Asner, Marsha Mason, Arye Gross, and Tim Kazurinsky.
(P)1996 L.A. Theatre Works, All Rights Reserved
Show More Show Less

"Offers decades of hilarity in one brilliant package." ( AudioFile)

What listeners say about The Best of Second City

I don't want to see what was rated second best

Given Second City's larger than life reputation, perhaps I was expecting too much. Or maybe the magic of improv (and this is improv style, and I think the scenes may have started as improv, but they're basically all scripted) lies in being in the room. Either way, I'm disappointed. And yes, a lot of the cultural references are from the 90s, but I don't think that's the problem either (unless you're too young to remember the 90s). It's just not very funny. The fun part is hearing the voices of people who went on to make it big, notably Stephen Colbert. The unfun part is that it's really not very funny.

A few of these skits are laugh out loud funny, but it really is just a few. Several are really vulgar, and a few are dated and completely inappropriate in our present culture. There is nothing funny about a teacher who gets frustrated when his students don't know the answers to his questions and starts shooting them one by one. This is no classic.