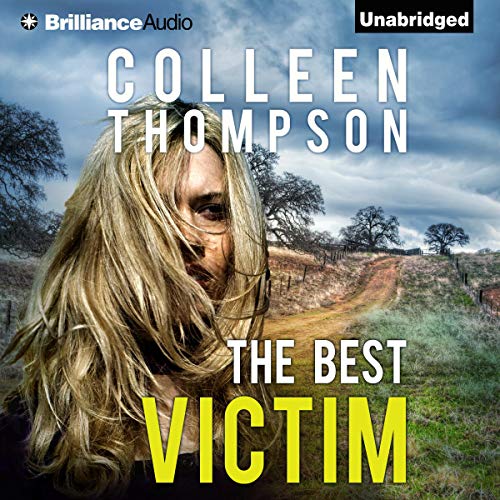 By: Colleen Thompson
Narrated by: Emily Sutton-Smith
Try for £0.00

You don’t deserve to live.

The ugly words delivered online finally hit their mark. The younger sister of web security specialist Lauren Miller took the taunts to heart - and took her own life. Devastated, introverted Lauren has nowhere else to turn but the arms of a man who shares a similar pain…and a burning need for vengeance.

FBI agent Brent Durant is determined to unmask the Troll King, a vicious Internet stalker he suspects of preying on the weak, goading his victims into suicide. Victims like Lauren’s sister. Working off the grid as a rogue agent, Brent risks it all - even his freedom - to bait the clever killer. But when he involves Lauren in his deadly game, their unexpected chemistry complicates an already tangled web. With his dark obsession all-consuming, can there be any room in Brent’s life for the passion Lauren stirs within him?

What listeners say about The Best Victim

In this age of technology on-line trolling is becoming a big issue, so this is bang on trend. I must admit there were a few plot holes here and there but I was able to ignore that because the story was well crafted and moved at a good pace. Both hero and heroine contribute to the action and their romance moved at a realistic pace rather than the insta-lust of so many stories like this. I particularly like the avoidance of an omnipotent central baddie a lot of these books have. The baddie in this case was composed of several characters, each with their own motives and agendas, which made the ending more difficult to figure out.

Fantastic book and under $5 WOW!

From the horrifying call that informs Lauren her sister has committed suicide, Colleen Thompson takes the reader on a roller coaster ride that never lets up.

Lauren is reeling from the news of her sister's death, not able to believe she would take her own life. Enter Brent, a former FBI agent posing as an officer on the case, who tells her he believes her sister was murdered hoping to convince her to use her hacking skills to find a predator. Then he kidnaps her. Only Ms. Thompson would start a romantic relationship with an abduction.

Ms. Thompson is a master of plot twists and throwing suspicion on pretty much every character in the book except Lauren. Lauren is a socially inept loner and Brent is so obsessed with finding a killer no one else believes exists, he's lost everything--job, friends, touch with reality. Both are so damaged, they are totally isolated until Brent convinces Lauren she can help stop a monster from killing other women.

This story is non-stop action, each page seeming to bring the reader closer to the killer and then something unexpected sends the characters careening in another direction and undermining their growing trust. No newcomer to the suspense genre, Ms. Thompson has done her research and every detail rings true. And being a romance, we know there's going to be a happily-ever-after, but I couldn't figure out how she was going to pull that off! But she did. This is an exciting, engrossing story that's a must-read for romantic suspense fans.

Emily Sutton-Smith was great with the delivery of the story

Save your money and time

This was probably the corniest story I've listened to in a long time. The "troll king/troll queen"...really? I would blame it solely on the narrator, but she's only reading what the author wrote. The narrator needs to work on her "emotions" because everything sounded forced. I'm glad this was a freebie

The characters were loved ones of victims which made the story a little bit emotionally dark and depressing at first. Luckily our heroine had a fat little dachshund named Dumpling to help off shot the serious nature of the book some. The second half of the book picks up pretty fast and there is a lot of action. There was only one story thread that was left unfinished in this book, not a huge one but still a bit annoying. In fact it could have been completely left out and really had nothing to do with the story. The very end was also a bit weak, in my head I had so many better theories of who done it. Overall I did enjoy the book and I will be keeping an eye out for more of Colleen Thompson in the future. For the price of 4.89 this is a good book. I enjoyed the narrator pretty good.

I can't remember if I have ever read a book by this Author before, I am glad I decided on this one though.
I am a kindle unlimited member, I enjoy reading so much. This book was set at a great pace without all the sloppy love making scenes. I enjoyed the tension between the two main characters Lauren and Brent and Brents jealousy over his former partner. I was on the edge of my seat wondering if Brent was really crazy or not

The book suffers from quite a number of flaws: Unlikeable characters, not character development, either brutal or cheesy with no immediate effect on the story but just for the sake of it. The plot drags on and on with no real highlight and has a predictable end. Also, the frequently used IT terms got on my nerves. - It’s an author’s job to do research but I don’t want to read about it in the finished book.
I liked the narration a lot and it definitely helped me to finish the book.