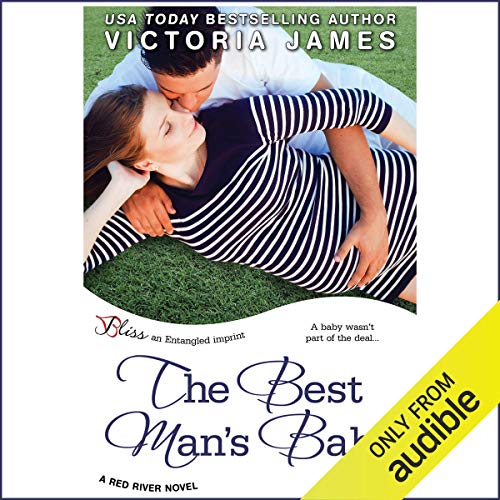 By: Victoria James
Narrated by: Eileen Stevens
Try for £0.00

Florist Claire Holbrook has always played by the rules her entire life, but breaks them to spend one night with sexy lone wolf Jake Manning, a man she's adored since she was a teenager. Six weeks later, things get complicated when she discovers they created a bond that will last a lifetime.

Jake has never played by the rules. Getting Minister Holbrook's daughter pregnant wasn't part of any life plan, but he won't run from his responsibilities. He'll step up and be the best man he can, even if he doesn't have a clue where to begin. The more time he spends with Claire, though, the more he wants her, and the harder it is to get close, because that would mean sharing the one thing he hasn't with anyone - the truth and his heart.

What listeners say about The Best Man's Baby

Claire Hollbrook has known Jake Manning for most of her life...and has crushed on him for just as long...but they've never really been friends, just acquaintances. When Claire's best friend, Holly, marries Jake's older brother, Quinn, she's happy for her friend but melancholy because she wishes for the same...then Jake asks her to dance. They have a one-night then he disappears. When he finally returns to town, it's to attend a party at Quinn and Holly's place...with a date. Claire is furious! Not only did Jake run out on her...she's pregnant! She marches over to the couple and...well, you'll have to read/listen to find out!
Follow Jake and Claire as he pursues her and tries to prove that he can and will be a devoted father...and maybe love Claire as well. Quick story with some LOL moments...as well as some tear jerking ones!

The story was pretty good. Pretty slow in the beginning. Sometimes it felt like it dragged on, but after the midway point it flowed better. It almost felt like two different books. The first half just wasn't up to par with the second. It does get much better. The narration is pretty good. Eileen Stevens does a good job of doing the male characters. But for some reason her female character comes off a bit whiny. Although to be fair, it probably has more to do with the content rather than the performance. All in all I would recommend this audiobook.

Without a bunch of hoopla, the Author writes a beautiful love story, that ends happily ever after.

the story good but why is the main character in this book drinking while she's pregnant? that's what messed up.