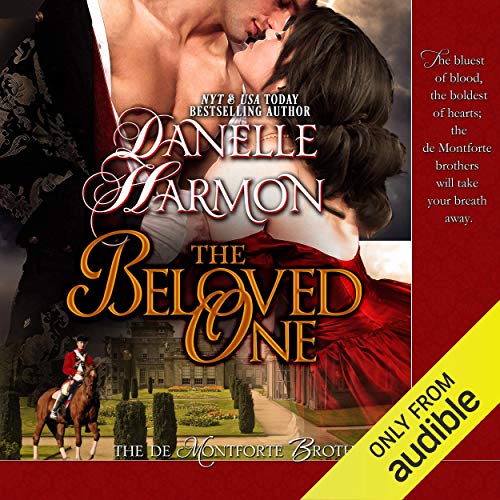 In this second installment of her breathtaking De Montforte Brothers series, critically acclaimed author Danelle Harmon introduces us to Englishman Lord Charles de Montforte, who awakens in the tender care of an American beauty after being wounded in battle. Amy Leighton has long wished for someone special to enter her life and take her away from a cruel, unloving step-family, but the handsome stranger is from an enemy land...and he's sworn to love another. A 1775-era Cinderella story sure to enthrall!

Would you consider the audio edition of The Beloved One to be better than the print version?

Yes and no. Yes, because it is easier to pick up on details that are missed in the reading. No, because I might read certain passages differently than a narrator would. Both are enjoyable!

Hard question because the story is one of my favorites! There is just so much detail! A lot of action and a lot of description. The hero and heroine both suffer from a severe lack of confidence, yet they each manage to instill confidence in the other. Each becomes stronger within the relationship.

He shows good emotionality and does not always rely on the emotion of anger to convey a 'strong male,' though he certainly uses it when the text calls for it. He is also unusually good at reading female characters so that the listener knows they are female.

Oh, there were many in this book! One of the most moving scenes was when Charles , despondent upon believing his family no longer cared for him, blindly walks into the river. Although smaller and not as physically strong as Charles, Amy throws herself into the water, praying to God that she can save him. Another moving scene was when Charles first returned home after a year and a half away. He arrived home early, catching his family unprepared, and shocking them all. Later, when Lucien confronted Charles about why he allowed the family to think he was dead, I could almost see Lucien's calm demeanor, with the "barely perceptible tremble of his lip" when he asked his brother if he really did still have a heart.

One of my favorite stories! Heartbreaking, funny, and in the end, very satisfying!

Would you listen to The Beloved One again? Why?

Yes, I really enjoy this series and would read and listen to all of the books again.

Amy is great! She is sweet and devoted.

Where does The Beloved One rank among all the audiobooks you’ve listened to so far?

Most certainly one of my favorites. The narrator is fantastic, giving depth to characters and making the story come alive.

What was one of the most memorable moments of The Beloved One?

Which character – as performed by David Stifel – was your favorite?

The Wicked Lucien, Duke of Blackheath.

Most certainly---I nearly did. I stayed up until the wee hours of the morning trying to finish it!

I love this entire series and can't say enough good things about it. I've read the books several times through and now will likely listen to the Audiobooks over and over again as well. Fantastic!

This is awful. A craggy old American man with a fake British accent reads books 1 through 4 and it was a gawd awful choice. The female voices are horrible and the hero, Charles sounds like a 70 year old man not a virile late 20's soldier.

Getting my credit back. YUCK. This should have been Derek Perkins reading.

Would you listen to The Beloved One again? Why?

I will not listen to the book again, but will purchase it in paperback and read it. The story line is well written, but David Stifel is ruining the entire series. If you enjoy reading as much as an audio book, I would read this series. The story is a tender love story of two people who both have a sense of innocence when it comes to physical activities. I actually found myself with tears in my eyes during some parts of the story and cracking up at other parts. This book takes you on a journey of self discovery, true love and is a journey. I enjoyed the plot, I do apologies in saying this but the narrator destroys this beautiful story.

Good God. The director is as much to blame if not more than the narrator, unless there isn't a director than it's simply a horrible narrator. I can not put this delicately; Mr. Stifel makes these characters sound thick tongued and simple minded. Why anyone thinks he does this series justice is beyond me.

I really enjoy Danielle Harmon's writing and she has created an excellent series. I pray she never uses Mr. Stifel to narrate another one of her books. He needs guidance and training or turn to narrating college texts.

If you could sum up The Beloved One in three words, what would they be?

You aren't ready for the end result; however, all books in series seem to be cliffhangers. This is the second of the series of three. I am credits shy of being in two or three series, and not sure which one I will be getting next.

What other book might you compare The Beloved One to and why?

Second book. The first is THE WILD ONE, and the last is about the third brother.

Enchanting Story- You Want To Cheer!

This was such a good story. It had such neat elements- a hero that wasn't perfect, a heroine that wasn't the type that everyone would have cast as perfect, an old dog, an evil step brother, and a very 'protective' matchmaker. Lord Andrew DeMontforte is flawed now as a result of the fire at the castle, and fears that he is going mad. He has visions- episodes that he does not understand. He doesn't want to be ridiculed by society and has withdrawn. He wants to be left alone, and shuns social gatherings. But his brother, the Duke, has other ideas. He believes that a wife is exactly what Andrew needs and sets the wheels in motion. Lady Celsiana Bkake is perfect for his brother.

David Stifel does his best job yet with this one. He has the right amount of energy, and his timing is impeccable in the delivery! I found myself laughing and crying over so many of the funniest scenes. And the scenes- the descriptions are incredibly written, so that the narrator's work - his delivery is that much easier. The listener feels more of a visual witness to the story.
Mr. Stifel's work with the character of Lucien is perfection.

The story is so entertaining- a worthy investment of time and money. You will not want to put it down or tear yourself away. This series is so GOOD!!

Excellent series...great story lines. I laughed several times. Just the right amount of romance and love. My only negative was the narrator. It's not that he did a bad reading..however, his voice was much too old for the ages of the characters. Garreth is supposed to be in his 20's and he sounds like he's in his 60's...it was hard to relate to love scenes. I can't believe that these things are not considered when hiring a narrator. I find this to be the fact in several audio books. :(

First of all, I loved the story and the characters. By this, the second installment in the series, I have developed quite a tendre for Lucien.

Having said that, the narration detracted somewhat from the overall experience. I noticed a few issues in Book One, not enough to take me out of the story, but in this book it got a lot worse:

(a) The characters all sounded cartoonish. Amy came across as slow-witted and Charles as a 70-year old man with severe gout.
(b) The narrator had the unfortunate habit of becoming inaudible whenever he tried to soften Charles' tone. I feel as if I missed half the story.

I see that the same narrator is used for upcoming books in the series and will have to decide whether I'd rather read them than listen to them.

Enjoyed listening as he overcomes physical and emotional issues. Find his place in life and the love of his life with a little help from his older brother. You really feel like you’re part of the family and are anxious to see what happens next!