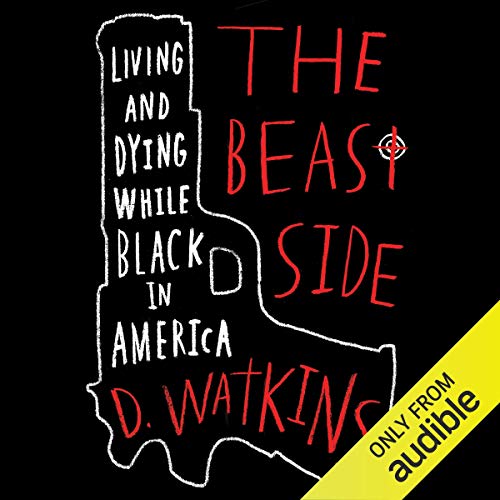 To many in the age of Obama, America had succeeded in "going beyond race", putting the divisions of the past behind us. And then 17-year-old Trayvon Martin was shot by a wannabe cop in Florida; and then 18-year-old Michael Brown in Ferguson, Missouri; and then Baltimore blew up; and then gunfire shattered a prayer meeting at a church in Charleston, South Carolina. Suddenly the entire country awakened to a stark fact: African Americans - particularly young Black men - are an endangered species.

Now the country's urban war zone is brought powerfully to life by a rising young literary talent, D. Watkins. The author fought his way up on the east side (the "beast side") of Baltimore, Maryland - or "Bodymore, Murderland" as his friends call it - surviving murderous business rivals in the drug trade and equally predatory lawmen. Throughout it all, he pursued his education, earning a master's degree from Johns Hopkins University, while staying rooted in his community. When Black residents of Baltimore finally decided they had had enough - after the brutal killing of 25-year-old Freddie Gray while in police custody - Watkins was on the streets when the city erupted. He writes about his bleeding hometown with the razor-sharp insights of someone who bleeds along with it. Here are true dispatches from the other side of America.

What listeners say about The Beast Side

If "a few bad apples" sounds reasonable to you...

Listen to this book. If you didn't grow up in a place like this, at least you'll gain some perspective.

This read opened my eyes further to the dynamics of what Black people have to go through on a daily basis. I was unaware of what happened in Baltimore and how bad East Baltimore was or is when it comes to Police unaccountability. I'm looking forward to learning more about what can be done to change history for the better.

Written by D. Watkins about his experiences in Baltimore - I am listening and I am learning.

Has my head been in the sand?

I had a lot of a-ha moments while listening to “The Beast Side”. So much of what D. Watkins wrote was new to me.

Two things really stuck out for me. We especially need access to better education and healthy food for everyone, especially our children.

Systemic racism in our policing, economy and government has to be addressed. Voting is one place to start, but I feel like we need to do more.

I’m not sure yet what my role is, but my head is no longer in the sand.

i really enjoyed this. "D" was very open with his life and included many aspects of current events. He not only came across as culturally knowledgeable but as an authority- an academician with real experience to affect our world in a significant way.

Great analysis and perspective on what's happening. Some overlaps from your other book but that's ok. Just wish you would have narrated. Would have made a stronger impact. Thanks for what you bring.