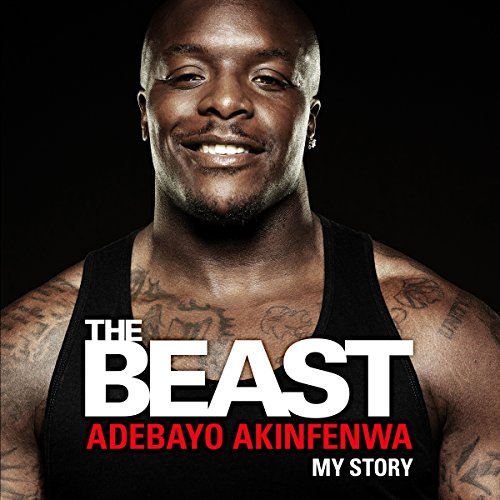 By: Adebayo Akinfenwa
Narrated by: Damien Lynch
Try for £0.00

Messi might be the most skilful, and Ronaldo might have the best shot, but according to FIFA it's 16-stone Adebayo Akinfenwa who's the strongest footballer in the world. With a larger-than-life personality to match, it's no wonder 'The Beast' has become an icon, attracting millions of social media followers, launching his own clothing label, and still banging in the goals for Wycombe Wanderers.

With such fame and adoration, it's easy to forget that Bayo is one of the hardest-working footballers around. His mental strength has had to be equal to his physical. Told by English clubs he was 'too big' to play football, he joined Lithuanian team FK Atlantas as a teenager, where he faced widespread racial abuse.

A career of grafting in the lower leagues of English and Welsh football followed, with spells at Barry Town, Torquay, Swansea, Gillingham, Northampton and AFC Wimbledon. Bayo's charisma and knack of scoring vital goals made him a fan favourite at each.

His last-ever kick for the Dons was a penalty at Wembley to help win the club promotion. 'I think I'm technically unemployed,' he told an interviewer after the final whistle. 'So any managers hit me up on the WhatsApp and get me a job!'

Inspiring, entertaining and full of character, this is the story of how Akinfenwa became a true cult hero and the never-give-up attitude that made him the biggest footballer on the planet.

What listeners say about The Beast

Good audiobook for anyone who likes the big man. not many lower League footballers could have a book but he just about pulls it off.

Great read, enjoyed more than I thought I would!

Nice book this one. A lot of stuff I didn't know about Bayo and a lot of misconceptions cleared up. Good narrator

Great insightful Listen, just wish it was read by Bayo himself to display more personality.

fairly truthful, as best you can get from someone still young and playing.