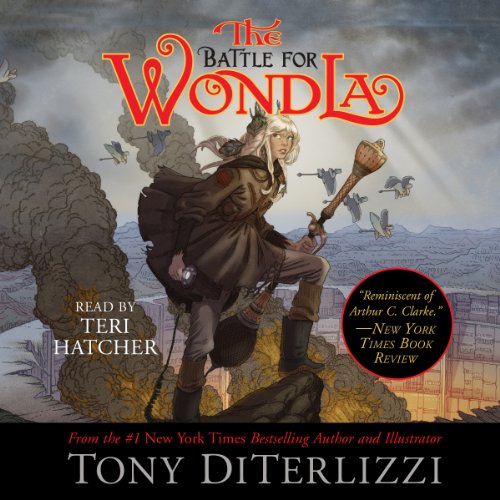 The Battle for WondLa

The Battle for WondLa

Eva Nine is at her bravest in the final book in the New York Times best-selling trilogy from the fantastical mind of Tony DiTerlizzi.

All hope for a peaceful coexistence between humankind and aliens seems lost in the third installment of the WondLa trilogy. Eva Nine has gone into hiding for fear of luring the wicked Loroc to her companions.

However, news of the city Solas being captured by the human leader, Cadmus Pryde, forces Eva into action once again. With help from an unlikely ally, Eva tries to thwart Loroc’s ultimate plan for both mankind and the alien life on Orbona.

Starring a host of unforgettable characters that reinforce the importance of friendship, The Battle for WondLa has all the hallmarks of a classic story - of the future.

Was ready for ending

The third was not as good as first or second. I felt like it was never ending especially with the epilogue. I see what other people mean by Teri's reading being robotic but it was fine to get through the series. Overall it's a creative story and I enjoyed it for the most part.

Ms. Hatcher manages to do "all the voices" without taking you out of the story. Enjoyed the whole trilogy!

It was one of the best books I have ever read. It was really good in my opinion 1 would say.