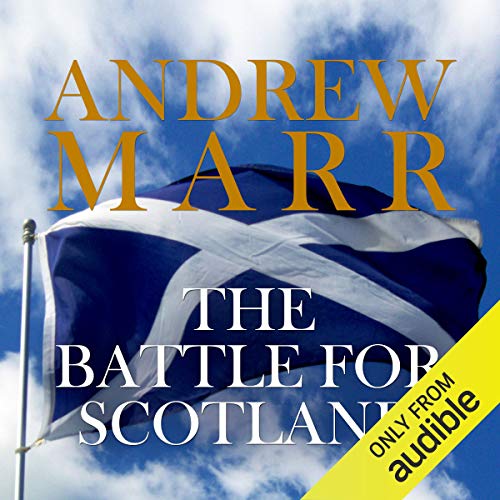 The Battle for Scotland

By: Andrew Marr
Narrated by: David Monteath
Try for £0.00

Andrew Marr's first book tells the distinctive story of Scottish politics - now updated with a new introductory chapter. "We may be about to see a new country - indeed, two new countries, emerging on these islands. Half a lifetime ago, I sat down to write this book as a work of history. As it's aged, it's become current affairs."

Just 20 years ago it seemed impossible that Scotland would ever get home rule, let alone full independence. Yet very soon there will be a Scottish referendum which will not only decide on this matter but which will have profound consequences for the future of all people on these islands. In The Battle for Scotland, first published in 1992, Andrew Marr provides the historical backdrop to these extraordinary events. He attempts to explain the deep sources of Scottish national feeling and the political will which has brought us to this deeply uncertain time. And in a substantial new introduction, Marr considers how we got here so suddenly, what the stakes really are and what the questions every voting Scot (and every non-voting UK citizen) will be asking themselves.

Andrew Marr was born in Glasgow. He graduated from Cambridge University and has enjoyed a long career in political journalism, working for the Scotsman, the Independent, the Economist, the Express and the Observer. From 2000 to 2005 he was the BBC's Political Editor. Andrew's broadcasting includes series on contemporary thinkers for BBC 2 and Radio 4, political documentaries for Channel 4 and BBC Panorama, and Radio 4's Start the Week.

What listeners say about The Battle for Scotland

Criminally Out Of Date

I chose this book thinking it would have been an interesting read in the run up to the referendum. However, I didn't read the description close enough and was disappointed to find that it was written 22 years ago in 1992! There is a more recent introduction but that nowhere near makes up for such an outdated book on a very timely subject. A bit of a cynical cash in - add a new introduction rather than redrafting the book and adding extra chapters for 1993-2014.

If you are interested in the history of "home rule" (independence wasn't seriously considered in 1992, years before we even had our own parliament) pre-1992 in Scotland then it's not too bad. However, an infinitely better book to read is "Road To Referendum" by Iain Macwhirter - a fantastic book on the subject.

Another problem with "The Battle For Scotland" is the fact that the author's been away from Scotland for 30 years (this is painstakingly obvious when you read the new introduction with errors and ill informed observations).

No doubt an important book in 1992 but there are many other better books in 2014 on the subject.