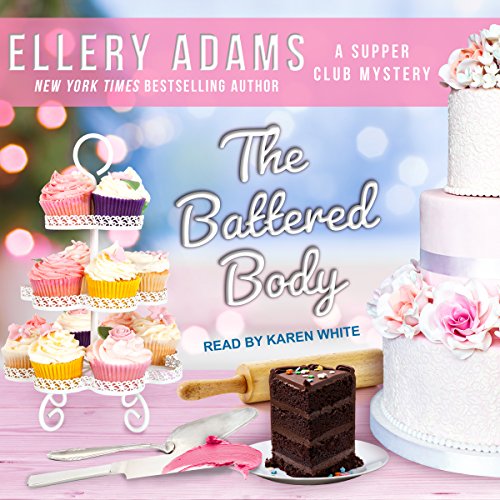 There's big trouble in Quincy's Gap when the "Diva of Dough" arrives to bake the wedding cake for Milla and Jackson's Christmas Eve wedding. The Diva, a celebrity television chef and cookbook author, is Milla's younger sister. And while her cakes are delectably sweet and incredibly beautiful, the Diva makes enemies wherever she goes. When one of the Diva's enemies decides to take her out, and Deputy Lucy Hanover finds the famous chef's body covered in cake batter, the Supper Club members find themselves up to their necks in suspects.

What listeners say about The Battered Body

I thoroughly enjoyed this story. I commend Ellery Adams for once again hooking me in and keeping me there from start to finish. While battling with anger over a sometimes friend/reporter/author, bringing too much unwanted attention to them, in the midst of a wedding gone haywire to helping to solve two murders, it kept me on the edge of my seat. I honestly did not see who done it coming. Karen White did a good job portraying the different characters, though the males all sounded very similar to my ears. She still managed to give each one a credible feel. Another surprise or two added to the whole story. Well done!

Favorite (so far) in the series

This has been a fun series. The mysteries are good, and the relationships make this series great.

The best in the series yet!

In <strong>The Battered Body</strong> by Ellery Adams, book five in the Supper Club series, Jackson Henry, father of the series' protagonist, and Milla, a teacher of cooking classes, are finally about to have their wedding on Christmas Eve. Milla, the middle of three daughters is happy to learn that her estranged younger sister, Paulette, is not only going to come to Quincy's Gap in Virginia to attend the wedding but is going to craft the wedding cake. After all, she is known to the country as the Diva of Dough from the cooking television show she hosts. Paulette soon proves to have a toxic personality, alienating everyone who comes into contact with her and abusing her personal assistant, Willow, whom she hints at keeping by holding something over Willow's head. She even makes fun of James's nutritionist, Dr. Ruth, working to humiliate Ruth's emphasis on eating in moderation when the pair appears on <em>Good Morning Virginia.</em> So when James gets a call from Lucy, a member of the Flab Five who now works as a deputy for the sheriff's department, that the Diva of Dough has died, he rushes over to the scene of the death.

Paulette died in the midst of preparing a cake, and Lucy's partner wants to declare it a natural death, but Lucy pushes to get an autopsy done because it looks suspicious to her. So rather than having a wedding on Christmas Eve, the family holds a funeral instead. And with the entire family present in Quincy's Gap for the wedding, plus all the people Paulette has offended during her short visit there, they have no shortage of suspects.

The Supper Club series, one of Adams's earliest series, originally published under the name of J.B. Stanley, started off much weaker than most of Adams's books, which I usually find highly compelling. I find Adams's writing so powerful that she has become my favorite cozy author and possibly favorite author of all time. In my <a href="http://fangirlnation.com/?s=Supper+club">reviews</a> of the first four books, I gave the first three books in the series four stars, which is usually perfectly respectable but unheard of for an Ellery Adams book, not giving a five star rating in this series until <a href="http://fangirlnation.com/2018/05/09/one-of-the-flab-five-is-accused-of-murder-in- stiffs-and-swine/"><em>Stiffs and Swine</em></a>, book four. But by now, Adams hit her stride, and I am seeing signs of the writing that made me fall in love with her in the first place. This book clearly is the best yet of the Supper Club books being re-released this year.

The plot of <strong>The Battered Body</strong> provides many exciting twists and turns, while also offering views of the lives of the members of the Supper Club. One especially enjoyable scenes comes when Bennett makes his long-awaited appearance on <em>Jeopardy!</em>, which has been his dream since the beginning of the series. We also have fun watching the local version of the Christmas parade. Another angle that we become invested in is the fact that James's ex-girlfriend has just had a book published as a fictional account of the Supper Club's first murder case. She makes the story unflattering to the group members, and her keeping this book a secret from James until after she signed a publishing contract led to James's break-up with Murphy in the previous book. In the midst of all these life stories, we see a couple creative mysteries. There is the potential murder case that draws our interest, and it is very well- crafted. But also, each of the Supper Club books has a minor mystery related to the library, which the 24-year-old identical twins Francis and Scott solve in their usual creative and excitable ways.

We further become invested in the lives of the characters, feeling sympathy for Milla, first that she has to have such a terrible sister and later that she can't have her wedding as planned because she has to have a funeral for her sister instead. We feel for James as he tries to reestablish a relationship with Lucy but sees that her police work will always come first to her, Thus he struggles to determine what he wants for his life and whether he can handle this relationship.

One thing I really appreciate about this book is the multiracial construction of the five members of the supper club. Lindy is Brazilian (or is it half Brazilian?), with real beauty from her heritage. I don't recall Lucy's precise ethnic background, but if she isn't Latina, she has many Latin features. And Bennett is African American. I think it's interesting that we never heard anything about his race until one word gets inserted in the previous book. In this book, it also doesn't make much mention of Bennett's race, but he does make the statement thst he wants to be one of the first African Americans to win on <em>Jeopardy!</em>. I appreciate seeing people of different ethnicities appear in the book, better reflecting real life than most cozy mysteries, almost all of which feature all white characters.

Karen White performs the audio version of this book. As always, she uses strong expressions, good timing, and creative voices for each character. White gives the book an extra flavor that brings it to life.

I thoroughly enjoyed <strong>The Battered Body</strong>. Besides all the great vignettes on life and the clever mystery, as well as the vivid characters, the book has an incredible ending that will delight all. I give this book five stars.

This was a good book and it kept me interested all the way through. I can't wait to listen to the next one.

If you are a cozy mystery fan, and you like to find a series of books that allow you to follow characters you really like-This series by Ellery Adams is for you!

Ok. Maybe cozy mysteries don't have to be believeable. But Bennett's storyline?????? After all that work and no hint of the outcome? Then it turns maudlin !

Thi is one of my favorite cozy mystery series. The characters and plot are incredibly well written. Karen White does a great job as narrator. I wish there were more books in this series.

Love all the books in this series!! Great characters!!! Can't wait til the next book comes out ...To see what is going to happen next!!!!!! Fast paced,fun books....

A wonderful addition to this series!
The characters are so interesting, and the story line is entertaining!

I love this series, from the cast to the mystery, to the narration. The flab 5 feel like people I actually know, and I root for them to succeed. There are a lot of plot lines which come full circle, including one HUGE shock towards the end of this book which changes one characters life forever. I can hardly wait to see what happens next there, because it was such a huge shift that could play out in so many ways. Just trust me, this is the book that will leave you feeling ALL the emotions!