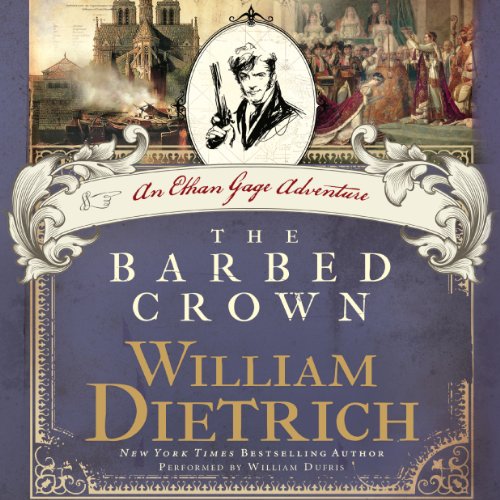 In this latest adventure by New York Times best-selling author William Dietrich, Ethan Gage is out to foil Napoleon's coronation as emperor, play double agent between France and England, and turn the tide of war - while attempting to save his own life and his marriage.

Gage fought beside Napoleon Bonaparte in Egypt and was his agent in Italy, America, and Greece. But this relationship, which at the best of times was uneasy, has gone sour, and now Ethan wants to make Napoleon pay for kidnapping his son, Harry, and nearly killing his wife, Astiza.

Smuggled into France with a beautiful royalist agent, Gage is determined to thwart Bonaparte's ambitions to take Europe. Surprises abound as a conspiracy collapses, Astiza reappears at Gage's side, and agents on all fronts try to recruit Ethan to their cause. Desperate, he devises a mad plan to sabotage Napoleon's coronation by replacing the power-hungry emperor's crown of golden laurel with a religious relic - the Crown of Thorns purportedly worn by Christ at his crucifixion. It is a scheme that requires a daring theft, perfect timing, and trust among the plotters; when it goes awry, Gage is soon on the run to England.

There Ethan joins a circle of brilliant renegades, including Robert Fulton, designer of the first submarine; rocket artillery pioneer Sir William Congreve; and smuggler Tom Johnstone. As two empires face off at sea, Gage is plunged into the decisive and lethal Battle of Trafalgar, trapped on board a French ship as Nelson's Victory bears down on him.

Moving from the glittering boulevards and squalid back alleys of Napoleonic France to the high seas of Regency England, filled with romance, danger, intrigue, and glory, The Barbed Crown is a thrilling romp that sees Ethan Gage once again embroiled in European history...and the fate of the modern world.

William Dietrich has done his research and amazingly kept the story moving along very nicely. This book is a 'joiner' between the previous and the next. You should read them all as close together as possible. Napoleon has changed and Ethan Gage is still trying in this book and succeeding to a point but he is a pawn in powerful men & women plans. His wife is more intelligent, son the same, Sir Sydney Smith less caring and tNelson does not come off looking too brilliant in this book but nice to see a different interpretation of the man for a change. I loved this book and have grown to like William Dietrich writings, William Dufris narration and Ethan Gage adventures. Don't start with this book but don't miss it.

Can’t wait for the next one

Truly a fun book rooted in some true historical and other made up situations. Recommend!

The Ethan Gage series is always a great ride!

Love the Ethan Gage series, better than Indiana Jones...Every book is packed with adnventure, fun, humor and frolic...Enjoy the ride!