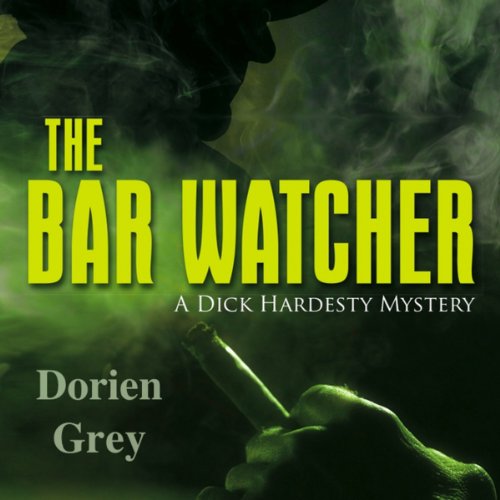 When the manager of an elite local bath is stabbed to death, attorney Glen O'Banyon hires Dick Hardesty to check into it. The motive for the murder isn't hard to figure - Comstock was a jerk of the first order. In fact, the list of people who might have wanted him dead might be larger than the club's membership roster.

Then, two obnoxious bar hoppers die in an apparent accident that turns out to be another murder, and when a third unpleasant individual meets an untimely demise, Dick begins to see a sinister pattern. All of the victims, prior to their deaths, had behaved badly in one of the local bars. Is someone on a mission to rid the world of people behaving badly?

What listeners say about The Bar Watcher

The Bar Watcher by Dorien Grey

I was lucky enough to win an audible copy of the Bar Watcher by Dorien Grey and I've now discovered the pleasures of driving while listening to a book.
I'm a Dorien Grey fan from way back and I have all of his books - both in book form and e-book form where available. I can't recommend the Dick Hardesty series strongly enough. I've read and reread the books and I know that I will be listening to The Bar Watcher again. I'm also eagerly waiting for more of the books in the series to be produced.
I love Mr Grey's writing style and I also enjoy the mysteries that he presents. I'm never sure about whodunit before the end of the book.
I really enjoyed the voice which narrated this book. It was easy to listen to and I tried to imagine the face which goes with this voice. In the Dick Hardesty series we are never told what Dick looks like so I guess that most of his readers play guessing games. I imagine Dick to be tall, well built and definitely good looking. He has no trouble attracting men and when we see the type of men that he attracts we can guess that Dick would have to be similar in appearance. When Dick is made welcome at a bath house which only permits the best looking guys to use the facilities we can guess that Dick has to be hot.
I have to recommend this audiobook and I strongly urge audible to release the rest of the series as soon as possible. I, for one, will be buying them.

This little mystery diffinitely ended satisfactory for me! I can't get over how much I love Dick's witty inner-self, his not-so-blindly trusting nature, and his tinacity in his investigations.

I had suspicions who the bad guy was early on but I get such a kick out of following Dick around around as he slowly makes his ways to clues and through some of the sexiest men ever!

A great written mystery that's not only entertaining but beautifully performed.

Number 3 in the Dick Hardesty series sees our gay private investigator hard at work solving another case of a serial killer targeting the gay community. Interestingly, all those who are murdered are pretty unpleasant individuals and a case could be made that society is better off without them, but Dick still knows he needs to catch the perpetrator. And when he does… Even though I’ve previously read this book, I’d forgotten whodunit. Although I had my suspicions. And I was right, sadly.

As always, Mr. Frez-Albrecht puts in a stellar performance. His voice has become Dick Hardesty for me. Should I ever meet him in the street I would have to concentrate hard on not calling him Dick.

The narrator treats the light-hearted moments in the book with humour and gives due weight to those scenes where its required. And, of course, hats off to Dorien Grey for creating those scenes in the first place.

Dick's humorous monologues are as enjoyable as ever. Three of my favourites were: "There's a definite difference between having a big prick and being one, but in Comstock's case he qualified in both" and "What could be bought for a song ten years ago would now require a full-scale opera." And when Dick chastised himself for talking to his body parts, "Jeezus, how many people do you know who have conversations with their crotch?"

As would be expected, there are references back to people introduced in previous stories. Bar delivery worker Jared Martinson is perhaps my favourite. He’s darn sexy, a fact Dick isn’t shy about sharing. In this third book we’re still in Dick’s slut phase, although Grey always closes the bedroom door on such activities. I’ve always been in two minds about this. While it would be nice to see Dick and his partners in action, I guess the stories are more about Dick’s relationships, friendships, and of course his cases.

Murders are not the only deaths which take place in this story. The increasing number of people dying from the as then unknown AIDS is an ominous dark spectre that haunts these pages. I commend Grey for his deft handling of this subject. Dick's sense of helplessness, anger at the lack of action by the authorities and gay community leaders, strikes exactly the right note.

For me, the ending was more satisfying than in The 9th Man. It's difficult to say why without giving away details. All I can do is urge the reader to give this audiobook a listen so they can see what I mean.

Dorien Grey writes another good mystery, with lots of twists and turns. He also starts bringing gay cancer (AIDS) into the story. It is a good reminder of how it must have been for the gay community in the 80s (the number of deaths is startling!).
The more I listen to Jeff Frez-Albrecht the more I like listening to him.
Can be listened to as a standalone, there are some references to other stories, but not enough to confuse.
I highly recommend the series...

Another great addition to the Hardesty P.I. Series

What did you love best about The Bar Watcher?

In the third book in the Dick Hardesty gay P.I. series, we find tough guy, Dick, playing the field much more so than the first couple books, which is interesting in that this novel is set at the beginning of the AIDS epidemic (which actually isn’t mentioned by name since the virus was not yet identified). Rumors abound of otherwise healthy young gay men getting sick and dying, causing Dick to take note. It so happens, Hardesty’s latest case involves investigating the death of one of the partners of “Rage”, a popular, members only gay bathhouse where only the gorgeous need apply.

What was one of the most memorable moments of The Bar Watcher?

What I found striking in this novel along with the mystery- which is solid, deftly written, with twists and turns–is Hardesty’s philandering. Wait, did that just age me a bit? Hardesty is a bit of a horn-dog in this novel, which is understanding considering the time the story takes place during the very early stages of the AIDS crisis. I will be so interested to see how Grey deals with the emerging crisis since it was so much a part of the lives of gay men everywhere, especially in large, gay popular cities in the USA.

Again, I must admit that I listened to the unabridged audio book version of The Bar Watcher. Unlike the previous two novels, which I had read both print and listened to the corresponding audio versions, this one I did not. I still feel I got a received a great reading experience. I appreciated listening to the same voice of the narrator, Jeff Frez-Albrecht, who narrated the first two Dick Hardesty mysteries. He helps to bring Hardesty to life in a deadpan, non-complicated way, yet also helps us to view a glimpse of Dick’s inner thoughts through Dorien Grey’s awesome prose.

I highly recommend The Bar Watcher, and the entire Dick Hardesty P.I series!

It is a bit hard to say this without spoiling things. but after the second book this one seemed to go for very similar themes while being worse at it in pretty much every way.

Book 2 gave me an understandable situation, a relatable motive and the kind of ending that seemed right for that type of story.

This one just feels too blunt and too sympathetic towards moralistic violence and I frankly find that rather off putting.

...and a pervasive type casting of criminal in a detective story series just is not good writing.
Sorry, but the mystery should not simply be solvable by identifying the character who fits the same character type as the murderers in the last two books.