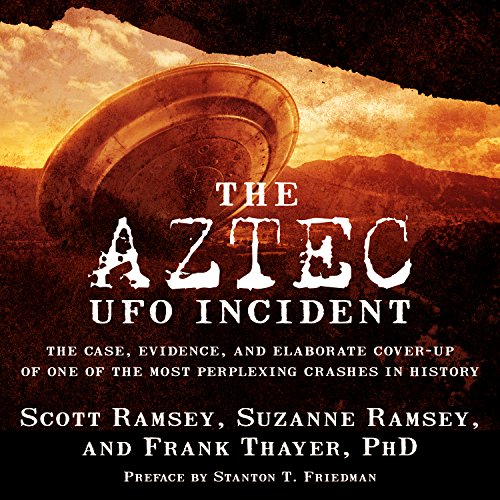 The Aztec UFO Incident - the first ever widely publicized report of a recovered flying saucer - was derided as a hoax for decades. But now the Ramseys and Frank Thayer reveal the exact spot where the craft landed and show how the 100-foot-diameter saucer was moved to a secret laboratory. Witnesses to the incident who were interviewed by the authors affirm that they were sworn to secrecy by the military. The authors also reveal the names of scientists who worked on the craft after its recovery. Also discussed are previously unseen documents from the CIA, FBI, US Air Force, and US Army that constituted a cover-up whose sole purpose was to surround the Aztec story with a smokescreen of lies, misinformation, and destructive allegations. Roswell is no longer the only proven flying saucer recovery we know about. The Aztec UFO Incident is a must-listen for historians and UFO students alike.

"This is a fascinating and carefully done exposé well worth reading." (Stanton T. Friedman, author of Flying Saucers and Science)

What listeners say about The Aztec UFO Incident

The book is poorly organized. The plotline is obfuscated by detailing insignificant material—including, for example, the definition and historical development of common terms. Further, it's read like a locomotive by a monotonous, pontificating baritone. The authors claim to have paid $500,000 on research for this disaster. If true, they should have invested a fraction of that on a competent ghostwriter and an acting student to read it. Avoid, even if free. This audiobook almost seems to kill brain cells.

Hard research only, with little speculation.

The Ramseys and Dr. Thayer did impressive research for their book. Their work is completely hard data from mostly first person sources and various records with very little speculation (which sometimes hurts work in this category). Some areas where they openly disagree with "debunkers" can be a little judgemental. Most of the information is correct but one area where they refer to the Army's CID as "Counter Intelligence Division" is incorrect. The Army's CID is Criminal Investigation Division, which is like the Army's internal FBI. Although given the context the CID would still be the investigating group. That one mistake I believe to be the only one in the book and it doesn't hurt the credibility very much. Despite this, I still think this is a worthy read for any serious UFO or anonymous phenomenon reader or researcher.

It is important to understand some of the background information on the people involved, but some of it drug on and on.

Much appreciated work hard to get in print

The book itself offers much information about UFO history in general, about the Aztec landing, and about UFI investigators, particularly Frank Scully. The narrator's reading of the tapes is worth the whole shebang. Excellent.

Most compelling ufo book on the market!

This book was very enjoyable to listen to! I was very surprised about how thorough thorough research was and how well they listed all of their sources! This is by far my favorite book in the field of ufology. I personally think they have shown without a doubt there was a UFO crash in Aztec. I look forward to reading more of their work. I must also mention that they were great at keeping this audience entertained while explaining all the documentation and research that took place.

outstanding balance of research and development

Now this is what a research project is supposed to be in form and function. the writers did an excellent job of chasing down leads to the very end. They also did something no one else has dared do until recently - question media motivation. As a former journalist I am always amazed by how people will accept whatever a reporter writers just because they put it in print. Bravo for digging into the yellow journalism that the government used to control the people and the masses. Something happened; what, is a question that we want to see the answers.

This story is really great. Unfortunately the author apparently likes having his own first name appear in his book several hundred times. It truly became repulsive, hearing “(Scott)” after every “I” or “me”, throughout the entire book. In the end, I still believe the story (and the authors’ research) are worthwhile, however, I would never consider reading nor listening to another book by this author / these authors.

The vast majority of the book focuses on the history and background of the skeptic of the first story regarding Aztec. Discrediting the skeptic isn't proof and really drags down the narrative.

Top notch research about a ufo crash recovered by US military. The depth of detail and witness corroboration is stunning. The amount of time, money and travel required for this book is staggering. All I can say is Wow! The original book by author Frank Skully (Behind the Flying Saucers) is still available.

Where is the Aztec Crash Details????

Do not recommend this. I was looking into Details and documented stories on the Aztec crash and what technology, propulsion, alien bodies that survived or not instead got a lot of canyon history and tons of non relevant data and dates peoples names and assumptions. No beefy interviews that I was looking for. I wasted 12 hours of listening to non value added data.