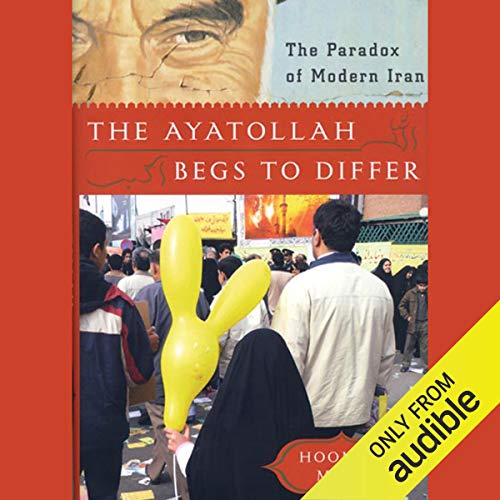 The Ayatollah Begs to Differ

A Los Angeles Times and Economist Best Book of the Year.

The grandson of an eminent ayatollah and the son of an Iranian diplomat, journalist Hooman Majd is uniquely qualified to explain contemporary Iran's complex and misunderstood culture to Western listeners. The Ayatollah Begs to Differ provides an intimate look at a paradoxical country that is both deeply religious and highly cosmopolitan, authoritarian yet informed by a history of democratic and reformist traditions.

Majd offers an insightful tour of Iranian culture, introducing fascinating characters from all walks of life, including zealous government officials; tough female cab drivers; and open-minded, reformist ayatollahs. It's an Iran that will surprise readers and challenge Western stereotypes.

"Perhaps the best book yet written on the contradictions of contemporary Iran....It captures like no book in recent memory the ethos of the country, in elegant and precise prose." ( Los Angeles Times)
"Essential reading for anyone wanting to understand the paradox that is Iran (as well as America) in the post-Bush world." ( GQ)

What listeners say about The Ayatollah Begs to Differ

This book does an excellent job of giving the reader the perspective of the average Iranian. Where it falls short is coming to grips with the downside of Iran's theocracy. It does not address Iran's support of terrorists at all, an astonishing omission. While it does discuss other negatives, it tends to downplay them. It discusses the fact that Iran closes opposition newspapers, but notes they often quickly reopen under other names. It makes it sound like it is no big deal. The author does not discuss the burden this obviously puts on a free press or that Iran jails journalists it does not like. The book is worth a read, it definitely humanizes Iran, an important contribution, but a more objective author would have taken Iran more to task for its suppression of human rights and support of terroism.

Interesting, but filled with pointless details

What could Hooman Majd have done to make this a more enjoyable book for you?

Get more in the political and economic works of the Iranian state and society, and less in the casual conversation he had with friends and relatives.

An informative tour, with some biases

Majd, an Iranian-born, American-raised journalist who returned the country of his birth several times during the last decade, is intent on providing a tour of modern Iran that cautions against any simplistic understanding of a multi-layered country and its people. Though the demonstrations of 2009 showed obvious discontent with the Islamic regime, that, according to Majd, shouldn???t be read as a sign of impending rebellion. Many Iranians, particularly the working class, are proud of their nation???s Islamic roots, and the system still enjoys a popular base of support.

Majd also attempts to explain quirks of Iranian culture and attitude that often elude Westerners. He argues that there are strong traditions of rights (if not exactly ???freedoms???, in the liberal, secular Western sense) and self-effacing politeness (which means that Iranians are often far more reasonable and less extreme in person than they might be in a faceless crowd). Both these factors create a society, as he sees it, in which people act one way in public, but feel free to express themselves as they like in private, a realm that the regime is careful not to intrude too far into.

Most of this understanding is revealed in pieces as Majd travels the country and meets Iranians from different walks of life, from cab drivers to politicians to mullahs to conservative religious families to liberal intellectuals to the chic Tehranian elite. We learn, for example, that some Iranians look with contempt on the low-class style and dubious diplomatic skills of their president, Mahmoud Ahmadinejad, while others admire him as a man from the streets who stands up to the West. Some question the need for religious strictures in public life (while being careful not to criticize Islam itself), while others find intense emotional outpouring in passion plays about the Shi'a saint, Hussein ibn Ali. They admire many things about the West, but distrust it for its past political interference. Like Americans, Iranians don???t always agree with each other, but they certainly do agree on being a people who can run their own affairs and have earned the right, through years of hardship and war, not to be told when to jump and how far by outsiders (a similarity in popular attitude to the US which, ironically, seems to fuel the ???nuclear energy??? head-butting with Washington). Generally, I found Majd to be skilled at turning his experiences into engaging, revealing anecdotes, though the larger narrative is a bit wandering.

That said, I thought that the author had some obvious biases. While he???s not uncritical of the ruling regime, he???s certainly not highly critical of it, either, and seems optimistic that the government is moving in the right direction on its own. As one of his friends puts it late in the book, ???your breath is coming from a warm place???. Meaning, of course, that someone who enjoys the freedoms and privileges of America is hardly someone to put aside the criticisms of Iranian dissidents and dissenters. Then again, that line kind of proves Majd???s thesis: Iran is too complex of a country to be easily summed up by anyone -- including himself. Will an "Islamic democracy" movement, guided from within the system itself, really bear fruit? I can't say, but Majd makes it seem plausible.

All in all, a good ???beginners guide??? to Iran, but perhaps not the guide to end one???s education with.

I loved this book. Hooman offers a great inside look to both what's happening in Iranian society as well as within the ranks of the ruling elite. He's able to show the listener how Iran is hardly the monolithic entity that most of the world has come to view. The one thing that I would have liked would have been to gain a little more insight into what direction Iran is moving in, both in their IR and socially. I would recommend this for anybody looking for a deeper understanding of the complexities of Iran.

Wow!!! Like Driving Your Car with the Break On!

I read this book with a great deal of interest and fascination into the world of the Ayatollah's/Islam/Modern Day Iran. With Iran being in the headlines on a more frequent and regular basis (At least since the days of the captive hostages during Pres. Carter's administration), mainly because of the "attempts to rein in Iran's nuclear program", it indeed turned out to be a fascinating read and a look behind what we typically get fed by our own media.

With the Iranian civilization having such an extremely long history, there are bound to be huge chunks of it that most Americans have no ideal about. The author, Hooman Majd, did a pretty good job in conveying to us a lot of the confusing and conflicting dynamics at play, especially in modern-day Iran. This is a country that is deeply steeped in cultural and religious backgrounds, yet at the same time, especially with its younger population, moving forward to try to find its place on the world stage.

One of the most interesting things that I've came across in the book that the author said was "the conservative religious right in America, would probably find a kinship with the conservative dogma of the Ayatollah's/Islam in the fact that both would find similarities in religion ruling the day, frowning upon premarital sex, abortion, sinful music, etc." (this is not verbatim) And I thought to myself, "hmmm, there are actually some good points being made here".

The author also points out that the Iranians have developed an interesting David versus Goliath mentality against not only Israel, but the United States and the Western world. It's not that they were ever going to outright "win" any battles against all of that, but just by the fact that they "stand up to all of that" and hold their ground, and many times his victory enough.

Although we Westerners tend not to know much about the Islamic/Muslim world of things, this book might be helpful in peeling back some of the layers to help us get an up close look at not only the ongoing propaganda's, but it look at real everyday life of real everyday people living in modern-day Iran.

Insight into the Iranian character and society

This book is written by an Iranian-American who works as a journalist. His family seems to be well connected as it is through some of these connections that he is able to interview several high ranking officials. His social group (perhaps obviously) is that of the upper middle class to upper class as they generally seem out of sync with the present regime which is supported by those from (apparently) lower classes.

These caveats aside, I found the descriptions of Iranian society, values, and cultural perceptions to be fascinating and feel that I now understand that country much better and that it would be enjoyable to visit. For those who have an interest in the Middle East or in Iran, this is certainly a worthwhile book and one that is likely to give more insight into how Iranians perceive the world than most other books.

I liked how honest and level headed author was. Although you recognize his bias
towards certain waves of Iranian opposition, his frank and very personal thoughts and emotions shared throughout the book does not imply a clear agenda. Which is exactly the weakness of khatami's supporters. Good liberal minded, peaceful people who write good novels but not a plan for a real effective change.
As a young woman who has recently left Iran, I cansay that the book gives a fairly true and accurate image of Iran these days under ahmedinegad. I like the emphasis of the author on "hagh"= the right of the people. Very clever observation and definitely a huge part of knowing Iranians.

Not to be missed. Many thanks Hooman!

If you are looking for a dedicated analysis of Iranian domestic, foreign and economic policy, you should look elsewhere as there are no shortage of such books to be had. But if you are looking to understand how such policies are felt and lived from various viewpoints on the ground in Iranian society, then this unique work is the book you have been looking for. Hooman Majd captures everyday life in Iran with an eye for detail, irony and empathy. Full of wit and humour, Majd’s book is both unfailingly entertaining and genuinely challenging. It invites the reader to think about the paradoxical nature of Iranian life in new ways and in ways that will enrich the thinking of anyone with a burgeoning interest in the complexities of Iranian society and politics. Whether Hooman Majd is chatting with a female cab driver in Tehran, indulging with the middle class at an alcohol infused party, or discussing his Motorola telephone with an admiring revolutionary guard, you will discover a side of Iran that is nuanced, fascinating and altogether human. Make no mistake, this is a book about politics in Iran but not in the way that such books are usually articulated, and it is not to be missed. Many thanks Hooman!