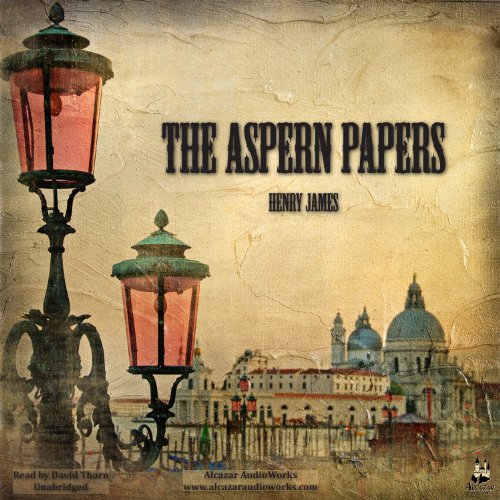 Henry James' short but much acclaimed suspense novel. Set in Venice, it's the story of an American editor's determination to acquire a collection of unpublished letters at any cost.

The letters are to the former mistress of a famous, deceased poet, Jeffrey Aspern. The mistress, Miss Bordereau is now very elderly, living modestly in a dilapidated old palazzo with her shy, awkward and uncomely niece Tita, an unwitting 'pawn' in the plot.

The strong characterizations of the three main players in the story make for a compelling story of lies, betrayal and psychological warfare. James' gift for building suspense is evident, the tension builds until the very last moment.

Henry James (1843–1916) was an American novelist, a 19th century master of literary realism, a movement to portray ordinary lives and situations devoid of romanticism or stylization.

Born in Manhattan to a prominent family, Henry James traveled extensively, and eventually settled in England. The cultural differences between Americans and Europeans were a favorite subject of his.

Occasionally one wonders whether there has been any editorial input applied in the choice of some voices for audiobooks. David Thorn - no doubt convincing in Hammer Horror or perhaps on a bar stool in the Rue de Rivoli is almost unbearable in this reading. The irritating, hammy, sing song tone, almost unintelligible, and used without any regard to sense or tone, meant I had to abandon the Aspern Papers within the first few chapters. Though in his impersonation of the 'ladies" in the novel gave some light relief, he is almost impossible to listen to such that I had to abandon the book.

I bought this short story because it was mentioned in a writing course. I get that this is supposed to be an epiphany (or lack thereof) tale, but I felt like the point could have been reached with considerable fewer words and considerable more interesting characters. I struggled to finish it, then found that the one minute summation in my writing course was more than adequate to tell this story. Disappointing.