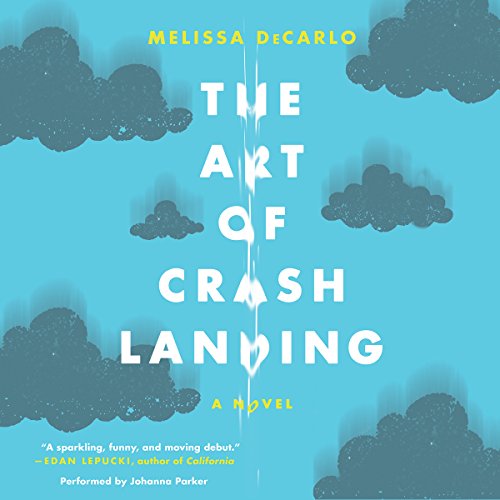 The Art of Crash Landing

The Art of Crash Landing

From a bright new talent comes this debut novel about a young woman who travels for the first time to her mother's hometown and gets sucked into the mystery that changed her family forever.

Mattie Wallace has really screwed up this time. Broke and knocked up, she's got all her worldly possessions crammed into six giant trash bags and nowhere to go. Try as she might, Mattie can no longer deny that she really is turning into her mother, a broken alcoholic who never met a bad choice she didn't make.

When Mattie gets news of a possible inheritance left by a grandmother she's never met, she jumps at this one last chance to turn things around. Leaving the Florida Panhandle, she drives 800 miles to her mother's birthplace - the tiny town of Gandy, Oklahoma. There she soon learns that her mother remains a local mystery - a happy, talented teenager who inexplicably skipped town 35 years ago with nothing but the clothes on her back. But the girl they describe bears little resemblance to the damaged woman Mattie knew, and before long it becomes clear that something terrible happened to her mother, and it happened here. The harder Mattie digs for answers, the more obstacles she encounters. Giving up, however, isn't an option. Uncovering what started her mother's downward spiral might be the only way to stop her own.

Hilarious, gripping, and unexpectedly wise, The Art of Crash Landing is a poignant novel from an assured new voice.

Enjoyable, well written and well narrated. My first by this author. I will look for more.

One of the best books I have listened to in AGES

Would you listen to The Art of Crash Landing again? Why?

Yes I am sure there are bits that i missed, perhaps not for a while but yes I would

What other book might you compare The Art of Crash Landing to, and why?

I couldn't compare this to anything else that I have read and my library is extensive, the pace story and delivery on this book were all excellent

When life gives you lemons...

I cannot wait for the next book from this author or the next in the life of Matty. I hope she makes lemonade I really do xxxx

If you could sum up The Art of Crash Landing in three words, what would they be?

What was one of the most memorable moments of The Art of Crash Landing?

Her last conversation with Queequegq, her stepfather.

Which character – as performed by Johanna Parker – was your favorite?

This review I have pasted below particularly sums up the satisfaction I felt after listening to this amazing first novel. The narration by Johanna Parker swept me right into the story and had me rooting for Mattie all the way through.
“I fell in love with Mattie, with all her sass, her snark, her bad ass ways. The best compliment I can give this talented new author? I wish I had written this novel. You nailed it, Melissa DeCarlo. And you deserve legions of very happy readers.” — Ellen Sussman, author of A WEDDING IN PROVENCE and FRENCH LESSONS

A beach read, if there are sharks in the water

I finished it only because my women's book group was discussing it at my house. It wasn't our first, second, third, or any choice really. Our discussion leader was born In Oklahoma, where the book is mostly set, and that was why we were reading it. The down and out heroine was its only appeal because she was a sympathetic character.

A must read debut novel

Where does The Art of Crash Landing rank among all the audiobooks you’ve listened to so far?

This is a must read for this year. Past must reads for me were the Alan Cumings autobio, and Gone With the Wind, and the long Eisenhower bio.

I didn't want to like Mattie, but I ended up really admiring her unapologetic vitality. Actually, the book is full of flawed characters just trying to adjust to their own humanity. The book is very well written: I learned much about writing and editing in this book, and I always appreciate that. That allowed the story to shine through.

Right in the beginning, when Mattie is riding in the tow truck, and I'm realizing that I'm rooting for her to just catch a break, and recognize it, and capitalize on it.

I love Johanna Parker's narration. She is one of my favorites because she reads the books: I can distinguish the characters because of her different voices and inflections, and she doesn't over-dramatize the readings. Some BOTs I have to quit and read the paper book because of the reader's over-dramatization. Johanna Parker is one of my go-to readers when I need a sure thing.

Mattie Wallace is a self-proclaimed magnet for misadventures. Yet our spunky heroin always lands on her feet when she finds herself in trouble. Broke, separated from her husband, and mourning her mother's death, she leaves Florida for Oklahoma in search of her roots. Her grandmother has left a house and 2 dogs. Her arrival is mostly unsettling to the local folks who knew her mother and grandmother. After following various leads, she finally learns the truth. In the process, she meets eccentric characters with hilarious results. This book tells a poignant, funny and vivid story of Mattie's search for her mother's story. The narrative is very well written. The chapters alternate between the past and the present. I was eager to know the end, but I enjoyed letting the author put together the pieces of

The main character, Maggie, was so unlikable that it distracted from the story. It also felt like this first-time author put every social and family issue she could think of into the story, and this overloaded the plot. Narrator was good but the book itself, not so much.