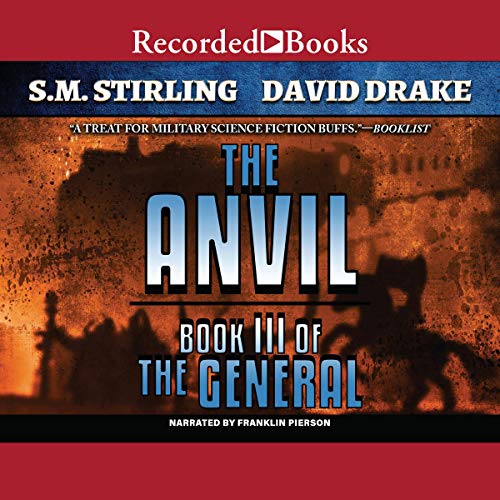 With the aid of a sentient battle computer, Raj Whitehall and his band of sworn Companions struggle to reunite the entire planet of Bellevue and find their mission impeded by Barholm Clerett.

What listeners say about The Anvil

Great series - but could have better closure

This is a well-crafted and very well-written series. You could read any single book and be satisfied (though left hanging a bit at the end of #3). The characters are bigger than life, yet still believable in the context of the world. The world-building and scene-setting is first-rate.
The narration is also excellent, with good pacing, expression, and distinct voices for characters, all without sounding strained or pushed. There are even some foreign language bits that all sounded good.
My single compliant is that the last book (this one) of the series doesn't really resolve one of the big issues in the series, at least not for me. Yes, it ends, but I assumed there had to be another book, and was very disappointed when there was not.

If you want great military sci-fi scenes, strong characters, and a solid plot, and can forgive a dangling details at the end, then this book is a good choice. I don't regret buying it, but I am disappointed with the lack of closure.

SPOILER ALERT - STOP READING if you don't want to hear the details...

What is missing? The first three books build up tensions between the paranoid ruler of the Civil government and his leading General. In the last book, the governor's nephew and likely heir is even along on the big campaign, trying to undercut the hero. There are several discussions about how the hero is likely to have his eyes burned out, or be executed, when he returns successfully. These issues are not resolved. I assumed there had to be another volume, and failing that another series, but I've found neither. If I'm wrong, please let me know. But this last book was a disappointment to me for this reason.

kept storyline and did not stop desire to finish

above average, with lots of potential. Will buy future books and complete the series.
TY

The Anvil continues the story of Raj Whitehall, assisted by the AI Center, in his quest to reunite Bellevue and halt the further regression of civilization. Once again Raj is sent to reconquer territory once belonging to the Civil Government, this time he must face the Brigade. Though considered barbarian heretics by the Civil Government, the Brigade is a more substantial foe than the Squadron was. They are more organized, better armed with percussion cap rifle muskets as opposed to the Squadron's flintlock blunderbusses, and on the whole closer to the Civil Government in terms of tech levels. Raj and company have their work cut out for them despite technical and logistical advantages, so much so that this story is only the first half of their fight with the Brigade. On top of that the paranoid Governor Bearholm has seen fit to saddle Raj with his nephew and likely heir which bringa many problems of its own.

As with previous books, the influence of actual history is quite strong. Raj and Bearholm are quite obviously based off the troubled history of Belisarius and Justinian, the Civil Government is structured and operates much like the Byzantine Empire did, with all the palace intrigue and politics that implies to add to the story. Think Byzantium with black powder firearms and cannon and you have a rough approximation of the world building, complete with hostile barbarian tribes and an Ottoman analogue in the form of the Colony.

All in all another good read, Drake and Stirling are both known for writing outstanding military SF and these are no exception. While I enjoyed the print versions immensely, I find I like the audio book form even more with Pierson's outstanding narration to make it come alive. Well worth the credits I have spent so far.

This is a truly great series of books to listen too .

I’m pleasantly surprised that this series has been selected for conversion to audio format . It was a joy to read back when and now even better to listen to while I’m doing mindless chores . Try it .

The books in this series are over way too soon! I devour these in audio format the same as I do in paperback!