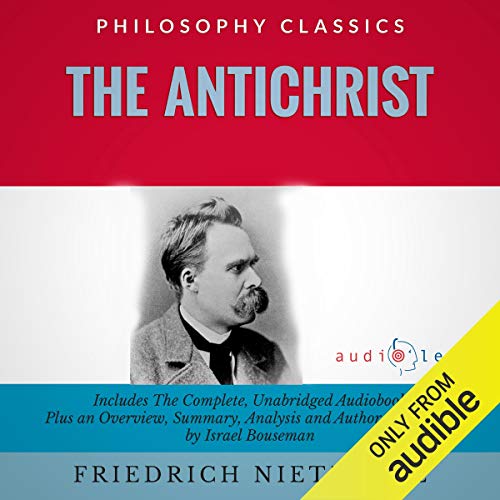 The Antichrist by Friedrich Nietzsche: The Complete Work Plus an Overview, Summary, Analysis, and Author Biography

By: Israel Bouseman,Friedrich Nietzsche
Narrated by: Philippe Duquenoy
Try for £0.00

Friedrich Nietzsche is perhaps one of the most controversial philosophers in history. His name is perhaps most closely identified with the statement "God is dead". As a result of this inflammatory style, it is more common to have heard of Nietzsche than to have read his work. It has the feel of religious fervor more than that of a classical text on philosophy, and in this respect this work, The Antichrist, was aptly named. It is not so much aimed at the expression of any new perspective or in support of the expansion of knowledge but rather represents an effort to undo the religious interference Nietzsche believed worked against the advancement of culture and knowledge. In many ways he was the mouthpiece for the most unfavorable logical conclusions that rose to the fore in the meeting of the scientific and Christian perspective.

Despite the disagreeable nature of his religious perspective, his views have undeniable power and influenced a host of other philosophers. His name has been synonymous with Nazism, nihilism, materialism, and anti-Semitism, and his ideas have been viewed by some with an almost fanatical regard. Perhaps the most ironic aspect of this posthumous reception is the fact that Nietzsche himself was categorically opposed to all of these perspectives. His poetic and radical style left him poorly understood by those who read him and served to foster many of the approaches he condemned.

The full narration of this text is preceded by a summary that highlights the main points of his work, including a biography of the author , an overview of the subjects covered, and a synopsis and analysis of the work. Also included are an examination of the historical context, criticisms, and the social impact of Nietzsche's writings.

This is one of the most comprehensive reviews of Nietzsche's The Antichrist ever produced and a must-hear for those interested in philosophy, theology, or history.

What listeners say about The Antichrist by Friedrich Nietzsche: The Complete Work Plus an Overview, Summary, Analysis, and Author Biography

This is one of the most comprehensive reviews of Nietzsche's The Antichrist I’ve read. Bouseman seems to know him and the situation in which Nietzsche was dealing with and attempting to express and he does so quite well.

15. ....”Who alone has any reason for living his way out of reality, the man who suffers under it, but to suffer from reality one must be a botched reality, The preponderance of pains over pleasure. Is the cause of fictitious  morality and religion.

The stage of Natural become abominable  vs God being the will to power.
Love it!

To tame a reading...

Can’t get pass the accent sorry...not a very forceful reader. Reading the “AntiChrist” stirs the soul, but not the reading! To tame for my taste.

The noise made between chapters was soooo annoying lol- It doesn't fit within the tonal context of the book at all. I liked the reader, though. He has an English accent, which honestly is preferable for audiobooks.

The narrator was fine, but a peculiar sound repeats persistently between chapters. This is Nietzsche, know your audience.

interesting but a false theory

It was very interesting discussion about good and evil and strength and weakness, Nietzsche takes a rather barbaric view of strength and weakness by saying all weakness should be eliminated,, and that the Christians suppress strength. going back to the time in which this was written there was a lot of controversy concerning the Catholic church, which was at the time using it's power over the people to fuel the Pope's war. But simply because corruption abounded in the Catholic church, does not mean that Christ himself was wrong about charity and kindness. I simply wish I could have a discussion with Nietzsche face to face, as I wish of a great many people.