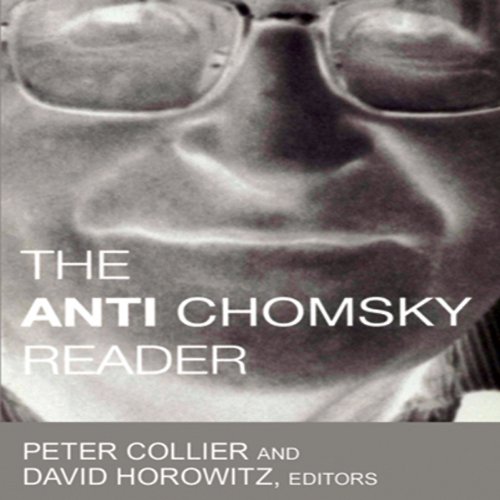 By: Peter Collier,David Horowitz
Narrated by: Kirk Jordan
Try for £0.00

This collection of essays examines Noam Chomsky's controversial ideas about various foreign and domestic issues and even the legitimacy of the linguistics theories on which his reputation rests. It explores the dark corners of what the New Yorker recently called "one of the greatest minds of the 20th century".
©2004 Peter Collier; 2004 David Horowitz (P)2007 Blackstone Audio, Inc.
Political Science United States
Show More Show Less

What listeners say about The Anti-Chomsky Reader

This book is a joke, but no-one's laughing

I thought I would get this ebook to listen to those who argue against Chomsky's views. I have read a lot of Chomsky's work and am familiar with some of the arguments he's been involved in. However, it is always important to consider other viewpoints and ideas, since one person cannot always be right.

So, I wanted to go in with an open mind and consider alternate points of view, since I think that is important.

I wish I hadn't bothered. I lasted 15 minutes before getting totally sick of the emotive drivel and shameful distortions that Collier has turned out. Yes, it is that bad.

1. He either does not understand Chomsky's arguments or has willingly distorted them since he constantly makes claims about what Chomsky's views are, but they are pretty much unrecognisable from what I had understood from Chomsky's work.

2. The writing is overflowing with emotive descriptions of Chomsky's alleged (in fact, just straw man arguments) views and behaviour. Chomsky is, we hear, "anti-American" (note to Collier: being critical of a country's foreign policy or power structures does not make someone 'anti-that-country'), and a wide range of other snide digs, that play the man rather than addressing the actual issues.

3. There is no attempt at balance. This is just a diatribe made by someone who clearly doesn't like Noam Chomsky and so will stoop to any level to denigrate him. There is clearly no interest in laying out a mature and sensible set of counter-arguments. Instead, it is playground squabbling from the start.

The narration is ok, although there have already been some mispronunciations in the first few minutes.

Conclusion:
This book is like listening to the ranting of a certain kind of person with far-right views, poor education and a very limited world view. That means that:
1. If you are limited in your faculties, and think far-right narratives like Fox are balanced and reasonable, then you might like this book.
2. If you have a brain in your head and understand the Earth isn't flat - then you really should stay clear of this by a country mile.

I am glad Audible has a no-quibble returns policy. This rubbish is not worth paying for.

I always had that gut feeling ...

I used to look up to Chomsky through my youth as he was touted in media and on university as one of biggest and most influential intellectual of all time. So I listened with curiosity what he had to say... but there was always that gut feeling that something is off...

15 years later, social discourse started sounding very much like all the Chomsky arguments that I listened back in rebellious years. Then I figured it out, what was off was the way in which he dealt with criticism, how he simply brushed it all aside and continued with his agenda through twisting words and meaning of words.

I was quite stunned to be able to source today problems our society faces to same relativism he was expressing for decades. (well, silly me...)

When you have to deal with adult that self-describes as anarchy-syndicalist you should know from start who you are dealing with. Problem is that media never truly challenged him on his topic where he was... in past 50 years... to say the least controversial, like downplaying Khmer Rouge atrocities, to serve his agenda and personal beliefs.

This book really shattered last piece of credibility that I would have been willing to extend towards Chomsky. Thanks to authors for having courage to write this book, knowing what backlash it could produce against them.

I was appalled to see that the highlighted review showing when I purchased the book, was a negative review by an individual who started by saying that he only listened to the first 15 minutes of the book. Audible, your bias is showing.

Chomsky's tendency and inclination to support his wild opinions by describing things in terms that neither he nor I truly understand like quantum mechanics, etc, leave me with a strong taste of boloney when reading him however unable to formulate a true counter argument.

it has been a real pleasure to hear Chomsky decimated by specialists from the fields in which Chomsky pretends to have knowledge.

My one lament is that like Chomsky himself, the facts will have no effect on the useful idiots who are his adoring fans.

Absolute must read if you've ever doubted or questioned chomsky or any of his theories.

Chomsky is lying through his teeth

It's astounding to what lengths an academic would go to to further his political agenda. The examples provided are convincing. Chomsky and Attenborough are cut from the same cloth.

They use strawmen all over the place and purposefully misunderstanding and misinterpret Chomsky. This book was a waste of time.

Chomsky is a maestro of illogicality dressed up in a veneer of intellectual sounding verbage. The author of this book does an excellent job of unravelling the illogicality that has done so much to influence youthful minds.

Discredits Chomsky rather than rebut him

I hoped this book would lay out Chomsky's arguments in good faith and present counterarguments. Unfortunately, it does nothing of the sort. It devastatingly discredits him as an apologist for Cambodia's Khmer Rouge, among other examples that show Chomsky had horrifyingly bad judgement. If he were a candidate for office, this might be a useful exercise in ensuring that someone with such bad judgement isn't elected to a position of authority. But Chomsky is an intellectual. His influence is in his original ideas, not his bankrupt moral authority and despicable associations.

I have never been able to make much sense of Chomsky's arguments. I know Chomsky subscribes to an ideology of anarchism or libertarian-socialism, but that sounded more like a complaint about employer-employee power relationships than a proposal for making a better world. Perhaps the authors are equally mystified by Chomsky, because they merely mock the label libertarian-socialism without defining or discussing it. Perhaps Chomsky does spout pure nonsense, but given that generations of people have found Chomsky insightful, I think it is fair of me to expect of a book about Chomsky would at least explain why his adherents find Chomsky persuasive.