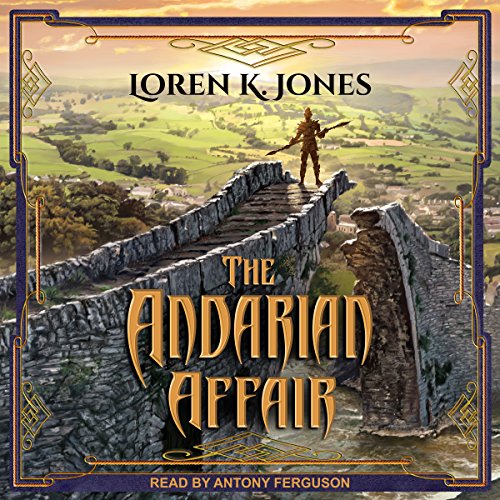 By: Loren K. Jones
Narrated by: Antony Ferguson
Try for £0.00

Warleader Fifth Stavin Kel'Aniston. With just two years as a caravan guard behind him, he has exceeded the accomplishments of every other Warrior in Kavinston. He earned his first star on his first expedition. He'd upgraded his star on his second expedition. He also founded a Trading House in Evandia. Then he came between the king and an assassin, and received a commission in the Evandian Royal Guard for his heroism. After that, his life got really interesting.

Master Trader Stavin is sent out to buy Kavinston's supplies. He fears that it is the end of his life as a Warrior, but after the supply run, Stavin goes to Evandia to tend to his Trading House, accompanied by eight senior Warriors and Warmaster Kel'Horval.

In Twin Bridges, Stavin becomes involved with the Royal Guard, and is a supporter of the king. This leads to him being targeted by the king's enemies as well as his own.

What listeners say about The Andarian Affair

The title is a little off setting.... but story is ok

The and arian affair .... the names and story doesn’t have to much depth but is entertaining so read or listen at your leisure... try to ignore the renaming conventions because it gets annoying if you think about.

it keeps you busy and. your imagination can thrive Steve just gets stronger and more doors open

One of my favorite series!

I stumbled upon this series by accident and have loved every minute of it! The story is fantastic, and the world that Loren K. Jones created was full of life even though it was brutal at times. I recommend this series to anyone wanting to escape into another realm! Audible 20 Review Sweepstakes Entry!!!!!

Book 4 audiobook is not yet recorded

I hope Tantor Media will produce book 4 quickly.
So I can listen while driving.

Another great installment. Happy to see the story evolve.

I was worried that this series was going to get formulaic with each installment following the MC on a caravan route through each progressive summer.

This book repeated the time span, but shook up the format of the last two books by not revolving around the “hired on to a caravan,” linear plot.

The tone does stay just a touch campy like the previous two, but fortunately it still manages not to feel like you’re stuck in another cringey YA series.

If you liked the other books, then you’ll like this one too.