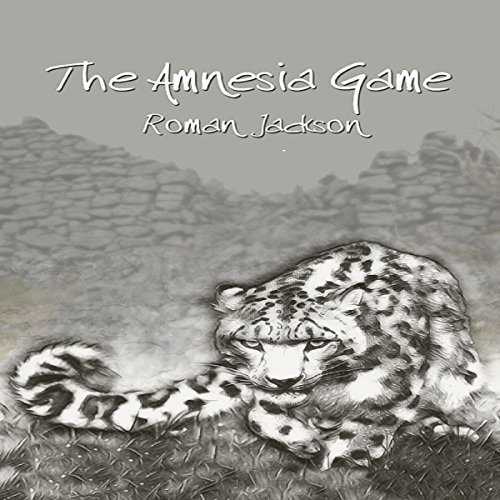 In the not-too-distant future the convicted are sent to the world's most dangerous prison, the Gulag, to be fodder for a world starved for entertainment. The "marks" have only one chance to survive. Retrieve their stolen memories...or die. With an entire world watching the 30th season of The Amnesiac, and an entire prison trying to kill them as their only path to freedom, one such mark is set loose in an attempt for his freedom. In a game that has never had a single winner.

Blind author Roman Jackson releases his first of this three-book series that asks, just because we can...should we?

Death and the White Lion.

This is the Hunger Games with added violence and death. It's a tale of corporation jealousies and conspiracy and one of personal vengeances, of love and of hate. It's a dystopian future with world wide fixation on a reality game with ratings higher than any other, even the Superbowl This is the Amnesia Game.
Simply put, this 30 years running hunting show releases a single convicted killer into the vast confines of the Gulag, his of all unsupervised violent prisoners, without memory. It is his or her one chance of freedom: collect, and restore, the five memory capsules hidden somewhere in the 100 mile compound and reach a single escape point. Then not only is that person pardoned they also receive a financial reward. For the prisoners, too, there is the chance to escape: get the mark and two tickets out are given to the lucky killers. No mark has ever made it out. All is watched on T.V. -, from the hunting and hiding, the fights, and even the memories restored if the any contestant manages to find the capsules. For this, the 30th year, special effects have also been added plus the release of not one, but three, Marks, running for their lives.

The book is cleverly presented, mixing the survival struggles of one of the three Marks with the vicious power struggles within the broadcasting corporation and the flashback memory fragments which beset the man as he releases the capsule contents to himself (and, of course, the audience). And there is another man who, for personal reasons, is hunting him for his own reasons,, a man simply known as Cut. This combination of themes keeps the storyline fascinating in a way that a simple action plot would not.
Narration by Eric McAnanallen is good, clear and well intoned, the voicing of the main protagonist adding character, and the other dialogue also somewhat differentiated. But despite this, the reading felt flat: more excitement needed to be injected at appropriate points. But it was, overall, a good narration which, along with the story, held this reader's attention.

I was fortunate in being freely gifted, at my request, a complimentary copy of The Amnesia Game, from the rights holder via Audiobook Boom. And now I am hooked. This is not a completed story but the first part of a three part serial. To find the answers to so many questions (even including who is Mark I?) I will definitely be waiting for the next installment. Recommended - but remember this is not the whole story.

The Amnesia Game is an entertaining distopian mystery. Roman Jackson adds new twists to familiar themes to create a fast moving action packed story. The only problem is that this the first installment in a planned series so you are left hanging with an unfinished story. Eric McAllen did a good job narrating the various characters.
This is a voluntary review of a free audiobook.

WOW! This book has the makings of a Great movie!

Very, I don't want to put it down (aka stop listening), engaging! A unique plotline with twists and turns you're not expecting!

Interesting story. Would like to see how it continues to come together for future books. Listened during my commute, and really enjoyed the narration.

What happens next! Always the tell of a really good book when you're dieing to know the end! Great narration by Eric J. McAnallen, amazing book by Roman Jackson! Please hurry up with the second book!

Woah, this was a crazy but engaging book. This book was very much The Running Man meets Hunger Games. A twisted, dystopian future where convicts battle each other for their freedom, all for the entertainment of the masses. All in all, it is pretty entertaining. The big twist is their memories are removed and they have to get them back. I thought it was a cool take on the premise. The story is paced well and has lots of action. The narration was a little dry. He did ok with it, but I would have preferred a narrator with more skill at doing different voices and displaying emotion. All in all, though, this was still an entertaining listen.

This was a great story. I like my heroes to be just that, actual heroes, who are good at what they're doing and are courageous and self-sacrificing. The challenge for any author is not to make things too easy for such a hero, so the reader/listener remains captivated by the story. This author has succeeded very well at that! The story is interesting, keeps the suspense going and has awesome action sequences. All of that against a scarily realistic backdrop of a dysptopian society ruled by 'big social media', with a lethal game show streamed nonstop to the masses.

If The Running Man and Total Recall had a baby, this would most probably be it! (minus the Schwarz however, if I'd have to pick the leading actor for this particularly story I'd cast Daniel Craig in a heartbeat :-)

The story would have benefitted from a narrator with more range. There was also an editing mistake, that is to say a do-over of a sentence was left in. There was also the occasional wrongly accented words in sentences.

The one issue I have with this novel is its ending. There's cliffhangers, and then there's unfinished stories. To me this falls into the latter category, which I find irksome.

However, all in all I enjoyed the story very much and will definitely be waiting for the next part - provided it will not be shorter than this one for then it will be not enough bang for my buck.

~ I was given this free review copy audiobook at my request and have voluntarily left this review. I was not required to write a positive review, but I did so anyway because it was great. ~