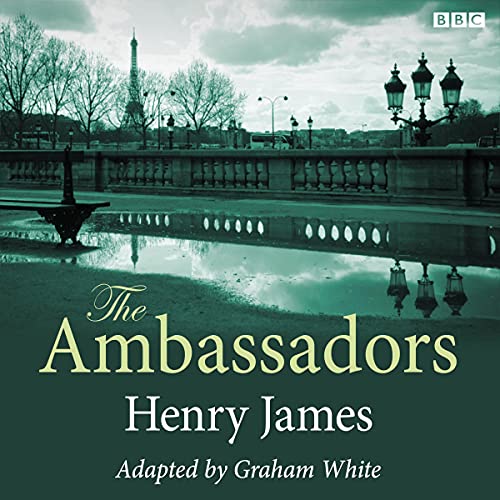 Adapted by Graham White from the Henry James novel that centres on the predicament of Lambert Strether, a 50-something New Englander lately arrived in Paris. Henry Goodman stars as the hapless protagonist in a novel many critics find James' finest.

Episode 1: Strether has been sent to the city to persuade the fun-living son of his wealthy fiancée back home in Woolett to return home. But now Strether, too, falls under the spell of Paris.

Episode 2: Strether had hoped to persuade the fun-loving son of his wealthy fiancée to return home to New England. But now Strether has fallen under the spell of the beautiful Mme de Vionnet. More ambassadors are sent by the angry fiancée to bring both men home.

With a full cast. Directed by Peter Kavanagh.

What listeners say about The Ambassadors (Dramatised)

SPOILT BY THE TRUELY AWFUL PORTRAYAL of FRENCH ACCENT

We would have enjoyed this play much better had it not been for the actress who portrays the French Lady who is so irritating, she is unlistenable. We returned the book for we could not listen to her more than once. The storyline is classic Henry James. We have another version of this which is a much better performance with all cast being professional.

Loved it - actors, production sound effects, story (cut) dramatization. I'd love to have more of James in this format.