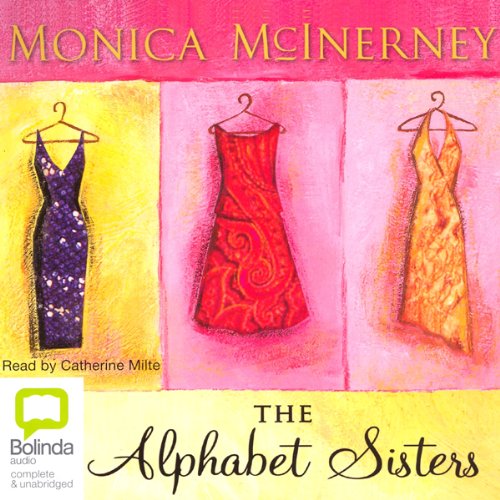 An unforgettable story of three generations of women from the best-selling author of A Taste for It, Upside Down Inside Out and Spin the Bottle.

Anna, Bett and Carrie Quinlan were childhood singing stars, the Alphabet Sisters. As adults they haven't spoken for years, ever since Bett's fiancé left her for another sister. Now Lola, their larger-than-life grandmother, summons them home for her 80th birthday extravaganza and a surprise announcement - she wants them to revive their singing careers and stage a musical she has written. Rehearsals get underway, and family secrets begin to be shared and revealed. But just as the rifts begin to close, the Alphabet Sisters face a test they never imagined.

"You'll be laughing out loud one minute and crying the next." ( Cosmopolitan)
"Family members click and clash in this entertaining story with a poignant twist." ( Australian Women's Weekly)

I loved everything about this book. The narrator was particularly good. What more can i say?!

BRAVO Catherine Milte! The performance was amazing! This book was so good! I enjoyed every minute!

I really enjoyed this one!

I really enjoyed everything about this one! The narrator was good and the story was fun. The characters were realistic and vivid and the family dynamic was believable and nicely drawn. Not an easy task to knit so many characters together seamlessly and realistically but the author did it and did it well.