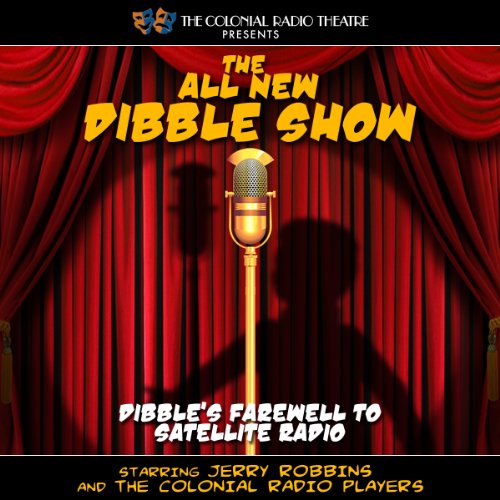 The All New Dibble Show

For eight years Colonial Radio's comedy series The All New Dibble Show played weekly on Sirius XM Radio. When the station went off the air in July of 2013 - so did Dibble. This is the final broadcast episode of CRT's long running satellite radio hit.

While The All New Dibble Show will continue on with new episodes, it has the honor of being on the air weekly since September 25, 2005. (It only went off the air for two weeks from then till 2013!)

The character that started creator Jerry Robbins on the road to modern radio drama, Dibble, first appeared in 1987, but had his first 13 episode radio series in 1990. When CRT began producing serious productions, Dibble went on a little vacation, returning in 2003 with the show we now have today - live from the Town Hall Theater in glorious Mayham, Massachusetts!

When it was announced that the Book Radio channel was being taken off the Sirius XM schedule, it was decided that Dibble should have the last word for CRT. After all, he's only 3'3", but he tells it like it is!

What listeners say about The All New Dibble Show

It ain't over till the fat lady sings

What made the experience of listening to The All New Dibble Show the most enjoyable?

Jerry Robbins and the cast of Colonial Radio Theater really kicked Sirius/XM in the rump. This maybe Mr. Robbins finest work. The funniest thing was this actually aired on the SXM!