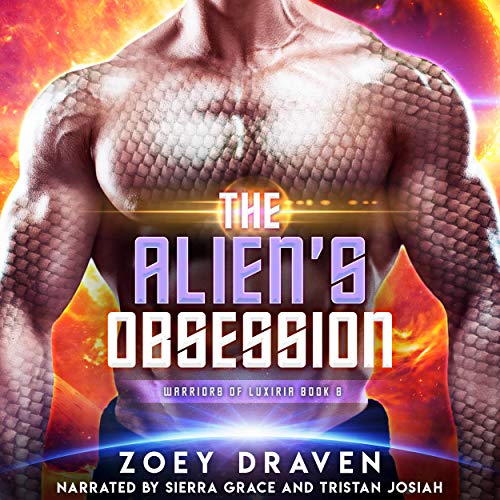 Welcome to Luxiria, where the twin suns are hot and the alien warriors are hotter!

On Earth, Lainey was the beautiful girl, from a wealthy family, who enthralled thousands of people with her gift of music - a girl who had everything. Or so it seemed...and then, she was abducted by aliens.

When she’s rescued from an intergalactic fighting ring by Luxirians - huge, pierced, seven-foot-tall alien warriors - Lainey lashes out and rebels when taken to their home planet. And when she hears that Luxirians have something inside them that comes alive for their mate? No, thank you - beam her up, Scotty!

Too bad she’s too nosy for her own good and stumbles into the path of an overbearing, dominant alien who demands her complete surrender.

Ambassador Kirov, the Prime Leader’s technology advisor, is a fierce warrior with an unparalleled intelligence that makes him even deadlier. Battling demons of his own, the last thing he expects is to catch a human female, with hair the color of fire and a body that makes him burn, spying on him late at night.

When his instinct awakens for her, Kirov knows he will have to fight to win his little hellion, who tempts his darkest desires and challenges him at every turn. But he’s running out of time, and he’ll have to do something drastic to win her heart, her mind...and her body. Or else, he loses her forever.

Full-length SFR novel with an HEA!

Note: The Warriors of Luxiria series should be listened to in order for the best experience.

What listeners say about The Alien's Obsession

I don't want cookie cutter alien romances. Zoey Draven provides a well plotted out adventure fantasy with action, mystery and sizzling romance. And, a little darkness that blooms in the light. I want more!

I loved all the books in series and the narrators are very good. More please.

The inventor and the pianist

Another one of Zoey Draven’s amazing books! Love it everything about it. Lany was the girl I thought would be self centered but she slowly change my mind . Everything that happen, I glad this couple was able to actually communicate their secrets and differences. And work through them together to fined happiness.

A beautiful love story on a planet far away; people and places are so vividly portrayed by Zoey Draven, it’s as though she’s really been there.
Laney is a pianist without a piano and being a piano player myself, I could feel her pain at not having her piano that she missed more than anything else on earth.
I could feel the depth of love between her and Kirov, the fierce and highly intelligent warrior who did the unthinkable when he had no other choice. Laney became everything to him and he vowed to protect her forever.
Narration was perfect read by Sierra Grace and the sensual voice of Tristan Josiah.
A superbly satisfying listen.