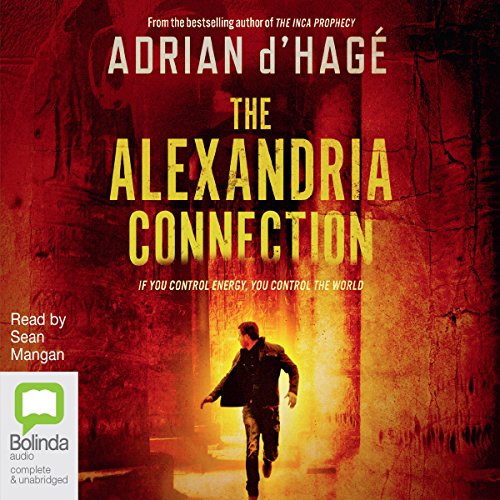 In the shifting desert sands of Egypt, rumours abound of a lost papyrus that will reveal the true purpose of the Pyramids of Giza. Could these ancient monoliths be the source of a new kind of energy, one that comes at no cost to the planet?

CIA agent Curtis O'Connor and archaeologist Aleta Weizman are determined to find out. Close by, a shadowy and powerful group known as Pharos meets in Alexandria, its membership a closely guarded secret.

Its first order of business: to orchestrate chaos on international financial markets with a series of spectacular terrorist attacks on the world's fossil-fuel supplies.

And in Cairo, amid the anarchy of Tahrir Square, thieves have broken into the famed Museum of Antiquities and stolen one of the world's priceless artifacts: the mask of Tutankhamun. Is the audacious theft linked to the Pharos Group?

What listeners say about The Alexandria Connection

What disappointed you about The Alexandria Connection?

I was willing to wait out the contrived exposition scenes and the overawed explanations of how big/fast/powerful every car/boat/explosive was, but I gave up when the awkward attempts at titillation began. It's like it was written by a 14-year-old, for other 14-year-olds.

THANK YOU AUDIBLE, FOR YOUR RETURN POLICY!! I'm so glad this was not a wasted credit.

Once more the master story teller ex military decorated officer talks about fictional power brokers and the James Bond type hero. How real and close to true life. It's a lesson for all of us caught up in the existential hum drum of life. Jim Daly the previous narrator if his books in my view was better for this type of book.

Political Diatribe More than a Mystery

The book had enough mystery to hold my interest, more or less, to complete the book; but the story was mostly a platform for the author to proselytize his leftist, anti-captalist, pro-radical environmentalist, anti-religion, anti-Israel viewpoints. He is certainly entitled to his points of view but in the name of science he misstates the science on both sides of the issue of global warming, overstating the certainty of mainstream scientists on various issues in support of global warming (which I believe in) and portraying the views of some radical right crazies as the view of mainstream America. His underlying thesis seems to be that environmentally responsible politicians only stand a chance of being elected in the aftermath of catastrophic terrorists attacks coupled with a suicidally stupid opponent.

Would you ever listen to anything by Adrian d’Hagé again?

I would absolutely not read anything by Adrian d'Hage again.

Sean Mangan's performance was reasonably well done, but with the story, he couldn't help but coming across at times as if he were giving a lecture on the author's propaganda.

I would have no interest in this book being made a movie.