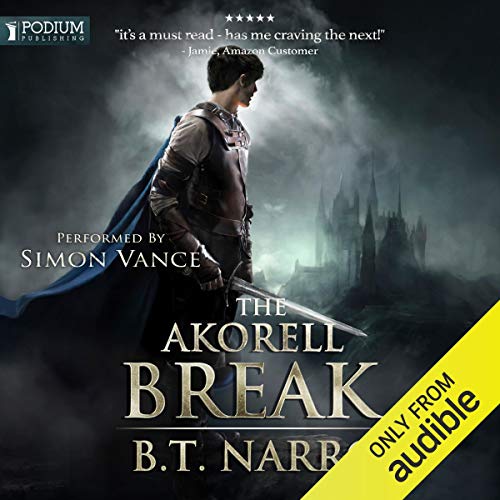 Desil and a few allies must race to obtain two rare ingredients that could create a swing of power strong enough to end the burgeoning war. Hundreds have already perished in battle, and thousands more are likely to die, pitting time against Desil and his allies. But they aren't the only ones scrambling to collect these ingredients in forgotten corners of the world. One is a king desperate for more power with an entire army at his disposal. The other contender remains a mystery, though his abilities are so vast that he seems capable of penetrating Desil's dreams even from across the continent. Having never met the man, Desil can only wonder what else he's ultimately capable of, and what he might do with the unprecedented power he would acquire if he beats Desil's allies to the ingredients.

What listeners say about The Akorell Break

Found this to be a little bit hard to keep at, slow to get to any sort of point and left more questions than answers.

Will probably get the third book if only because I've invested so much time into this series now that not finishing would feel like a waste of my life rather than that I could care less about the characters.

as always however simon vance does an excellent job.

easy to fall into and enjoy. not sure what else to

loved it. on the third book now and easy to listen.

really good part 2. I really liked the first book part 2 is a great story. I've found many Part 2 books flop and feel like a struggle. not this one. highly recommend it.

Disappointing and that the plot never developed the book never really went anywhere it was childish and devolved into peoples just slaughtering each other maybe I just ran out of steam. I don’t want to listen to the series anymore

Go quickly into the 3rd book

Be ready to go straight into the 3rd book because this one ended on a cliffhanger.

I can easily become distracted by real life when the writing is shoddy. This book was fun, polished and kept me engaged. I look forward to the next!

The first book was promising, whereas this one was sub-par. All of Desil’s mooning and whining was tiresome and a complete turnoff for the story.

I like the character building and building up of something about to happen. Cant wait to find out.

At times the story seems rushed, still a great book but doesn't feel complete as a book on its own

Tedious and more than a little repetetive

The story really hasn't changed much from book 1 ten hours of them trying to get some stone. It's like the author got distracted half way through and then someone reminded him about the stone they needed to get it so he threw it in as an after thought.


Also I don't like the magic system in this series. It lacks imagination and is very disjointed.

Anyway worth reading if you have a spare credit but definitely not a summer blockbuster. Oh the reader tho is awesome! Can't say enough good things about him.

i loved the first book and the second book didn't fall short of the first if anything it added more to the story and that ending is amazing!

There is no real ending to this book.

It seems only written for to get you to buy the next book in the sequel.