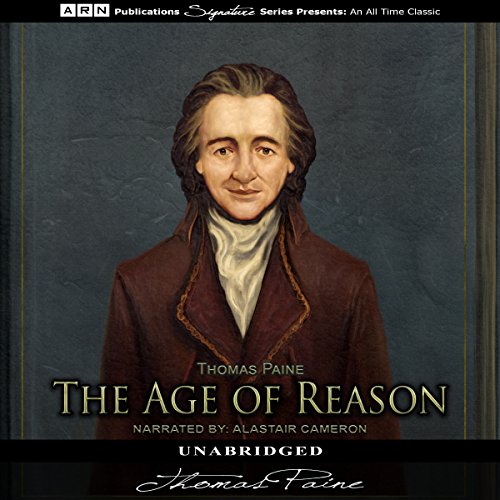 The Age of Reason

By: Thomas Paine
Narrated by: Alastair Cameron
Try for £0.00

The Age of Reason is formed of two parts. The first, written in 1793 in France during the revolution, is a criticism of not just the Christian church, although it is primarily focused on Christian theology, but as a rejection of all forms of organized religion, including Judaism and Islam. However, Paine's position is not one of atheism, and he begins the book with a declaration of faith in one god. However he considers organized religion to be a construct of man, and the books it is based upon; the Bible, Torah, and Quran, to be no other than human inventions set up to terrify and enslave mankind, and monopolize power and profit.

The second part of The Age of Reason, was written in 1795, and comes as a response to criticism of the first, and is also a more detailed analysis of the Bible, because whilst writing the first part he did not have access the book, where he goes through both the old and new testaments to highlight inconsistencies and explain his doubts as to the provenance of the books.

Paine explains that although he does not doubt that Jesus existed and was a righteous man, the account of the Bible is doubtful at best because it is written by others, and cannot be the direct word of God. He does not believe Jesus to be the savior of the world, and implores listeners to seek God through his creation and its exploration through science, rather than through what he terms religious mythologies.

What listeners say about The Age of Reason

A Dawkins before hating Christians was cool!

Easy to understand. Basic principles. Organized and thorough. This is truely an enlightened work. Boy did I laugh out loud to the cheeky comments he made in detestment of Christianity. Referred the dove to a pidgeon. LOL! Highly recommend!

My first read of Thomas Paine and what a nice surprise!!
He’s amazing, can’t wait to read his other titles