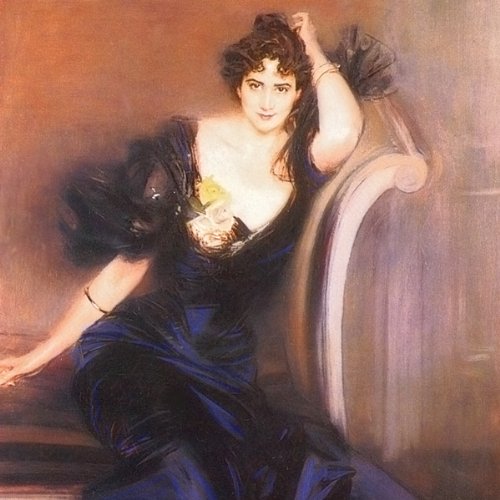 The Age of Innocence

By: Edith Wharton
Narrated by: Laural Merlington
Try for £0.00

The Age of Innocence, Edith Wharton's most famous novel, is a love story, written immediately after the end of the First World War. Its brilliant anatomization of the snobbery and hypocrisy of the wealthy elite of New York society in the 1870s made it an instant classic, and it won the Pulitzer Prize in 1921.

Newland Archer, Wharton's protagonist, is charming, tactful, enlightened - a thorough product of this society. He accepts its standards and abides by its rules, but he also recognizes its limitations. His engagement to the impeccable May Welland assures him of a safe and conventional future, until the arrival of May's cousin Ellen Olenska.

Independent, free-thinking, and scandalously separated from her husband, Ellen forces Archer to question the values and assumptions of his narrow world. As their love for each other grows, Archer has to decide where his ultimate loyalty lies.

What listeners say about The Age of Innocence

A masterpiece of literary construction. There doesn't seem to be a word, sentence, or page out of place. At its core, 'The Age of Innocence' is story that shows the strength and the orchestrated customs and mores of social upper-class society of the 1870s, but also shows its narrowness, its contradictions, and its inflexibility. Inserted into this setting is a frustrated love story (almost a love triangle). It is the this frustration that illuminates the tensions between the coming modern age and the Victorian society that is united in its desire to keep the world from spinning forward and apart.

I purchased this during a sale. The narrator sniff and smacked and read over mistakes. Choose a different narrator -- any narrator.

Excellent reading of a marvelous classic

This narration of Edith Wharton's classic novel is a genuine masterpiece. The voice is so exactly right, making the most of the elegant prose. The story line may be dated, but questions raised are timeless: how much of our thinking is controlled by our desire to maintain standing with our peers, and how do we balance personal responsibility with pursuit of personal fulfillment.

Love at its most repressed

What if you fell in love with someone you can not have, despite the fact that she loves you in the same manner. You're married but can't get a divorce to persue your love because in this time, your social standing is more important than your personal happiness. Crazy ! I know ! but this is the time period in which the story takes place. Amazingly well written, which perfectly describes the time period and the characters. I can understand why this book is regarded as one of the finest books of the 20th century.

Nothing should be so tragic. I despise books that have tragic endings with no glimmer of hope for happiness.

and too much detail about the rooms.


Blue stocking New York, the Gilded Age of the 1870s. The aristocratic denizens float through an orbit of intimations, insinuations and niceties in rigid fidelity to the complicated and exacting demands of such elegant Manhattan coteries.

This winner of the 1921 Pulitzer for fiction is an acerbic attack, carried out with indirect deftness, on the oppressive social conventions of an exceedingly class-conscious society.

The protagonist Newland Archer, who is a young lawyer in an esteemed firm and heir to one of New York's finest families, stands on the brink of announcing his engagement to the pretty and coddled May Welland, when enters Countess Ellen Olenska, May's beautiful and worldly cousin. Ellen has an aura of European sophistication from the time she has spent abroad and is shadowed by scandal, having left her husband, a Polish count, to declare independence from social constraints.

Archer is instantly infatuated with Ellen and develops a strong passion for her, which results in an internal struggle between his desire to consummate his love for Ellen and his "societal" obligation to marry May, purely a fruit of the social order.

Ellen, on the other hand, with her veil of enigmatic charm, is a character of depth and empathy. She refuses to conform to the code of customary conduct, with the exception of her general sense of loyalty to refrain from lightly considering betrayal of family, even under the weight of unbridled passion.

Wharton draws Newland as a man who is a cut above the typical men of the day, in his intelligence, education and emotions. Yet he lacks the drive and intestinal fortitude to set himself free of the bonds of society and the shelter of the known in marrying May. Ultimately, May resorts to a fraudulent manipulation of Newland in an attempt to prevent him from further pursuing Ellen.

The greatest tragedy of this novel was that two women loved Newland Archer, yet he was unable to fulfill the needs and desires of either, nor his be fulfilled by them.

Wharton ingeniously crafted a social novel in which a deep current of drama surges below the refined, cultured surface she has painted. Under the amber exterior of affluence, one enters a virtual sphere reeking of anguish, abnegation and sad submission to a pre-ordained social order. Carpe Diem by all means, but only if the Clan Deigns it proper.

This is a period novel set in 1870s Upper Manhattan. The main character, Newland Archer, has just enough awareness to realize that his wife and his high society is constraining and boring, and not enough independence or determination to do much more than flirt with the notion of leaving either. So everyone lives very proper lives and we get lots of descriptions of people and places and table settings. Wharton won the Pulitzer Prize for her portrayal of this society, and she describes the rich families of 19th century New York and their tribal customs with breezy but anthropological detail. This is a time and place where the color of the dress you wear to the opera or the soup you serve as a first course is fraught with social implications. Wharton describes the inner lives and outer appearance of her characters and the world they live in in minute detail, but ultimately, I just did not find them very interesting, and the plot was an almost superfluous element.

The Age of Innocence is all wistful self-examination that never goes very deep, and a lot of delicate interactions between rich people who communicate in code. If you're fascinated by inner turmoil, marital angst, and 19th century etiquette, this book may be for you, but I found the lack of any real drama, the fact that all the characters were cut from the same cloth, and the stifling circumscription of the setting made for a dull book.

So, I didn't enjoy The Age of Innocence much, but that's completely because of my subjective tastes. I'm sure other people love it for reasons that are good and fine to them. Objectively, Wharton's writing is vivid and descriptive and at times there is a sparkle of wit and a flash of humor, though I wish I'd seen more of it, and she really brings the setting to life and makes us understand the characters to their depths. (Not a great challenge, as there isn't much depth to them -- this is not a knock on Wharton's characterization, but on the people she is describing.)

What made the experience of listening to The Age of Innocence the most enjoyable?

It was my first audio book to listen to while I was going to sleep. I've long intended to read this book, but it was much nicer to be read to.

Her voice was appealing, and she read the various roles quite well.

The terribly constricting society of the time was well defined.

None of the characters intrigued me, it was predictable and way too long. I had a hard time getting through it.

Lots of dull listening to get to the interesting and satisfying end. Prefer Tolstoy because the characters are so rich and even those so tragically flawed, one can't help but love. These characters are flat.