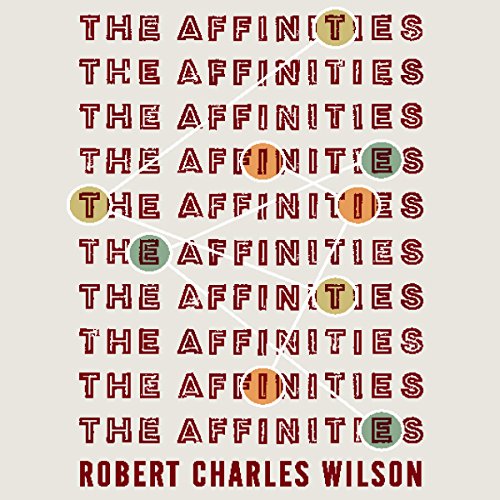 In our rapidly-changing world of "social media", everyday people are more and more able to sort themselves into social groups based on finer and finer criteria. In the near future of Robert Charles Wilson's The Affinities, this process is supercharged by new analytic technologies - genetic, brain-mapping, behavioral.

To join one of the 22 Affinities is to change one's life. It's like family, and more than family. Your fellow members aren't just like you, and they aren't just people who are likely to like you. They're also the people with whom you can best cooperate in all areas of life - creative, interpersonal, even financial. At loose ends both professional and personal, young Adam Fisk takes the suite of tests to see if he qualifies for any of the Affinities, and finds that he's a match for one of the largest, the one called Tau. It's utopian - at first.

Problems in all areas of his life begin to simply sort themselves out, as he becomes part of a global network of people dedicated to helping one another - to helping him. But as the differing Affinities put their new powers to the test, they begin to rapidly chip away at the power of governments, of global corporations, of all the institutions of the old world. Then, with dreadful inevitability, the different Affinities begin to go to war - with one another. What happens next will change Adam, and his world, forever.

What listeners say about The Affinities

This was the first R.C. Wilson novel I have read. I have a particular love of social science fiction of all types. The Affinities has a nice meaty premise; social personality matching taken to the extreme. It's a competently written book - not at all literary, style-wise, but good.

The overall structure of the plot was solid and goes along at a pretty fast clip, but I found the character development a little lacking. Especially when it came to antagonistic characters. They felt very cardboardish to me.

I'm also one of the few people who is not a massive Scott Brick fan. I find him over-dramatically emotive in his readings.

But if you like this narrator, and enjoy a clever, fast-paced alternative fiction thriller, I think this might hit the spot.

This could be amazing...

... if he'd given us the whole story, not just the first half. Once again, Robert Charles Wilson commits a home run in concept, if not in execution. It turns out that a 60% majority of humanity can be divided into one of 26 groups known as Affinities. An Affinity is a group where the members share a common psychological as well as genetic similarity. Some Affinities are larger than others, and our main character is a member of Tau, the largest Affinity. Over the course of the book, we see the Affinities go from a privately owned, Facebook like service, to something that is predicted to supplant governments and alter the trajectory of the human race.

Now the reason for the low review. The book only takes us to the point where we don't know specifically what is going to happen between governments and the Affinities but we know it is immanent, as the book stops rather abruptly. I know multiple book stories sell better than single books, but I would rather have a 12 hundred page complete story than wait a year for what is effectively the next page of the manuscript. Bad cess to the publisher, the editor, and Mr. Wilson. One of them should have put their foot down and published this as a single story.

I loved this book. It's quite a trick to write something that is

1) Populated with characters who feel real, that we can connect to
2) Actually says something; make you think
3) Is genuinely original

The way 1 & 3 are artfully combined is what I think makes Wilson's books so enjoyable. Often originality is synonymous with 'weird' and hard to relate to. Not so The Affinities. The concepts of the novel are borne of a substrate made up of solid characters; indeed you could almost lose the science fiction aspect and still have a pretty decent book.

I agree with some other reviewers who have said that The Affinities could've been a bit longer. That's true, but the "fill in your own blanks" feeling one may be left with at book's end is I think even better. The reader is forced to think; in my case, not so much along the lines of "what happened next?" No, nothing like that. I was left in a place of newness; considering ideas new to me, some clear, others half formed, nicely coloured with an emotional aspect, also with its own unique flavour.

That, in my opinion, is science fiction gold.

Where does The Affinities rank among all the audiobooks you’ve listened to so far?

If you like Robert Charles Wilson's past books, especially the audiobooks read by Scott Brick, this will feel happily familiar. It's an interesting premise, though it feels a couple hundred pages shorter than I think it needed to be - more episodic than epic like his other books. Still it pulls you through and if you're already a fan, you'll love it. I finished this book in a little over a day - and can't wait for his next one. If you've not yet read Robert Charles Wilson, go read Spin, or the Chronoliths, Julian Comstock, or Darwinia - they're national treasures, especially Spin. This one feels more for fans, and tbh, as much as I love RCW's work, I think the sense of place was a bit too much. I lived in Vancouver and in Toronto, and I can see the little New West proletarian dive bar he's talking about, or the Rosedale mansion - but it felt almost a little too much - like if the book were set in LA or New York, I don't think the author would have felt the need to make the 'thereness' of it so intrusive. Which sounds critical, and yes, I suppose it is, but this is literally my favourite living author and this book is just awesome. A lot of the reviews talk about social media, and I don't know, I didn't see much of that - this is more the early-www idea of epistemic communities writ large, and merged with student movements and the illuminati. It's hard to say, because again, I think there are a couple hundred pages missing ... still ... loved the heck out of it.

A novel only the author could care about.

I'm a huge fan of the author. But, I wish he'd sign up for talk therapy instead of writing books like this. Take a self-indulgent Philip Roth novel, rip out the ending, and add a few paragraphs filled with dodgy biotech ideas, and you'll have a reasonable description of this book. It's a fun 2000 word short story stapled to a novel filled with the least interesting of all Mary Sue plots: the neurotic, privileged middle aged man with daddy issues gazing at his navel and pinning for the perfect woman. What a waste of writing talent.

Tribal need to belong from a modern perspective

Fascinating premise but melancholy, almost heartbreaking, ending. This near future, soft SF book plays upon the realities of modern-day social networking and projects a time when tests can group people into affinity groups where you will find like-minded people with whom you are neurologically predisposed to mesh well with. The book takes that deeply human need to belong and spools it out with technology and how sorting people could simultaneously be a boon and be a wedge between those new groups and the rest of humanity. Exploring what it would feel like to find you have no affinity, what it would feel like to be expelled from your affinity group. It takes our tribal roots and brings it to the 21st century. Recommended.

Intriguing Ideas, and a wonderful story.

What I love about this story is how it begins. The person who recommended this book to me hit the nail on the head with his review. This sci-fi novel starts in a world that could happen next week. The Affinities are a concept that could be in developement right now. It is a story of a man(Adam Fisk) who joins what anyone now a day would think to be a cult, which bears striking resemblence to the initial stages of joining scientology, albiet without a billion year contract. The articles, that denote a timelapse and section off the story, provide a great outside look into the near-dream like world adam lives int It keeps you engaged at two levels, one with Adam's personal story and the other with how the world and affinities are growing with each other.

The performace was good. Although I though the range of voices the narrator used was a bit limited.

I am continuously intrigued by social media and it's hold on the world population when there are so many more important issues, events, concerns that exist. This book hits on all aspects of this.
If you liked this listen to The Circle.

interesting ideas and story and reading was great. I hope there is one to follow as I want to hear more about the future of the characters etc.

I liked it, characters were we'll developed and just enough mysteries to keep entertained. How trusting is real family?
this is a good read. I hope you ienjoy