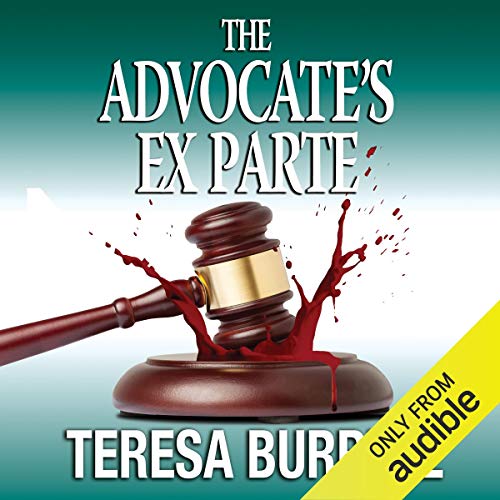 Attorney Sabre Brown is summoned into Judge Lawrence Mitchell chambers for an ex parte hearing. When the judge attempts to discuss one of her cases, she refuses to listen without proper counsel present.

Sabre's shock at his death is only surpassed by an attempt on the life of Dr. Carolina Heller, a psychologist she employs on a regular basis. Sabre now fears for her own life.

Sabre enlists her private eye JP, and they begin to comb and scrutinize her cases, searching for connections between the two crimes. But Sabre's life is in danger from someone much closer to her.

Sabre and JP's roads diverge. While JP infiltrates a twisted world of greed and corruption, Sabre is caught up in a domestic crisis fueled by obsession. As each is forced to fight their own battles, the question soon becomes, can they find a way to save one another?

I enjoyed this book. So much was going on. Sabre had so many cases in this book and I liked the fact that at the start of each chapter there was a summary of the case that Sabre or her investigator JP was working on, otherwise I think it would have got a bit confusing without it. The individual cases were quite different and interesting, so kept you listening until the end.

The narrator was very good and kept the story interesting.

They Just keep getting better!

Laurel gives a wonderful performance. I would be more apt to chose a book if narrated by Laurel

When Sabre is called into the judges chambers to speak with the judge alone she knows it's against the code of ethics and requests another lawyers presence. When she attempts to bring in a witness the judge becomes irate and throws her out. Later that night the judge is killed by a hit and run driver.

Sabre's teenage client is accused of murder and Sobs is not sure he is innocent. But it is her duty to defend him anyway. She hits a few bumps along the way.
Reluctant to turn to JP for help because his former wife is staying with him she feels she must do most of the work herself. And with a new man in her life she is a very busy lawyer.
In spite of the light hearted moments and the mystery of the case the author addresses the problem of domestic violence in a real but yet nongraphic way
For me, Teresa Burrell's books are like potato chips, you can't stop with just one. I hope that the author keeps the series coming. I must confess I've got a little crush on JP, and I want my own Bob.

One of the best of the series!

This is Book 5 of the 7 book series. The series does not need to be read in order. The protagonist is Sabre Brown who is an attorney and child advocate in San Diego. The Advocates ExParte has action and suspense as well as interesting personal relationships. Narration is so-so, but a much better narrator handles Books 6 and 7.

Sabre is a child advocate for the courts in San Diego. There are a lot of threads to this story – some peripheral, some primary. While it took a bit to get into, it was well worth sticking. This time think children smuggled from Viet Nam for nefarious purposes. I’ll try another one or two of this series as I run across them. 3.8 stars.

The Truth will set you free or kill you

Teresa Burrell is truely a children's Advocate. In all 5 of her Advocate books she takes on different legal issues and children's safety issues. Is family togetherness always the best thing for children. She brings stories to light that are a real and present danger to children today.

The Advocates ExParte brings Sabre Brown, Bob and J.P.  back together again as Sabre has several cases of great importance at the same time. When a Judge trys to share information ExParte or without opposing counsel present Sabre protests. When the Judge tells her to never mind and is then killed Sabre will never know what he wanted to tell her. Then when Dr. Heller a Psychologist Sabre uses regularly has an attempt on her life Sabre is in a race to find out who is behind it and why.

At the same time she is working with a mother who left her child Slone at home while she worked. And another child accused if murder. Sabre had her hands full.

J.P. Sabre's trusted Investigator is on vacation working on his own personal issues and is distracted while trying to help Sabre as best as he can. The interweaving stories and the ri voting conclusion is exciting and nail biteing intense at the same time.

The ending of this book should leave you satisfied and ready for Book#6.

Laurel Schroeder once again does an Excelent job narrating as she has in the previous two Advocate Audiobooks. If you have read the other 4 books you won't be disappointed with the Advocate Series.

And call me a biscuit!

Teresa Burrell's fictional children's attorney, Sabre Oren Brown, is supported by some unforgettable characters. There's her best friend, Bob Clark, a full time attorney; part time cigarette smoker who keeps trying to quit; and a faithfully married man who's perpetually being snowed by a sob story from a pretty girl. There's Sabre's rarely seen mother who has an outsized ability to make Sabre feel guilty for not visiting enough. And there's Texas-transplant private investigator J.P. Thorne, with his courtly manners and homespun sayings.

Thorne's a cowboy, from the brim of his Stetson to the tips of his real cowboy kicking boots, the dark tan leather kind with rounded tips and soles and heels that are replaced every so often - not pointy-toed fancy stitching highly polished black dancing boots with by a wanna-be. Thorne retired as San Diego law enforcement, and still has friends and enemies on the force. He's been a constant in The Advocate series, and "The Advocate's Ex Parte" (2013) gives Thorne a chance to show his stuff.

Burrell lovingly explores a part of Southern California too often unknown, even to natives: the horseback riding, rural ranching and farming part that's overshadowed by the beaches, boats, and sun of "The Real Housewives of Orange County." Burrell's fiction is more true than the "reality" show ever had been.

Burrell's remains an attorney's attorney. Sabre works way too many hours; sympathizes with clients who lack any ability to empathize with anyone; and she continues to follow the Rules of Professional Conduct. As the writers of television's "How to Get Away With Murder" (2014 - present) show, it's much easier to pretend, in the interest of a story line, attorneys are amoral than to work within the rules and still develop an engaging storyline. Burrell does both, a task which even John Grisham fails from time to time.

Burrell's last book, "The Advocate's Dilemma" (2012) was a difficult solve. "The Advocate's Ex Parte," with several parallel cases only connected by Sabre's and Thorne's involvement, is even more challenging - but very plausible. Listen all the way to the end, or you'll miss something important.

[If this review helped, please press YES! Thanks!]

The books in this series keep getting better! The Advocate’s ExParte is an exciting legal thriller with a child advocate lawyer. The cases are involving and often tragic. While it’s nice to have read the other books in the series, this book works fine as a standalone.

Recommended for mature readers. While the content is fairly tame, it does include sexual situations including a woman telling about her rape.

The narrator takes a bit of getting used to, but she does an ok job with the books.

In this book Sable is like a juggler trying to keep multiple cases going at the same time. The main action involves Sable's detective and his ex-wife and her abusive husband. There is plenty of excitement and tense moments involved.

The narration was great and fully understandable.

The Advocate's Ex Parte is the fifth book in the Advocate series which I would recommend to anyone who loves a good mystery with lots of action and some good courtroom drama. This book has simultaneous stories brought to a logical and believable conclusion at the end. The plots of all of Teresa’s books are believable and exciting. This book is no exception. Laura Schroeder did a good job of bringing the story to life.

I am fully committed to following this series now. It is very well Put together yet easy to follow. Teresa, really appreciate your work and would love to meet you some day. Please continue to entertain and stretch my imagination.

enjoyed the book. kept me wondering . easy to listen to. I would recommend it.